Can Poverty Be Ended ? 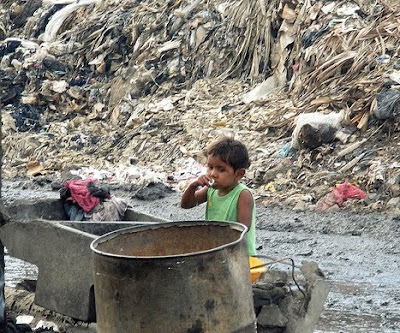 Poverty is one of those social evils that has been around as long as civilization has been. It seems like there has always been a societal division into those who have and those who don't -- the haves and have-nots. And for just as long there has been a discussion on how to eliminate poverty (or whether to even try to eliminate it). Some people and some religions don't believe poverty can be eliminated, and say all that can be done is to offer a little help whenever possible.
Part of the discussion is whether government should do anything to try and alleviate or eliminate poverty. Some economic systems, such as unrestrained capitalism, would have the government do nothing. Those who believe in that system would put the entire burden of fighting poverty on individuals and religious institutions. This has proven to be a massive failure since unrestrained capitalism creates far more poverty than individuals and private aid organizations can handle.
Here in the United States we have developed a system of regulated capitalism (although the amount of regulation varies over time) and made it a government responsibility to to try and alleviate poverty. This has worked better than unrestrained capitalism in providing basic needs to those in poverty, but has done little to actually eliminate it -- mostly because the will of the people to spend enough to eliminate poverty has waxed and waned over time, but never "waxed" for long enough to do the job.
The economic system that has been the most successful in eliminating poverty has been democratic socialism (as exhibited in countries like Norway and Sweden). Although not perfect, this system has brought social justice and equality much closer to truly being realized, and has closed the gap between the haves and have-nots.
But whether it is regulated capitalism or democratic socialism, these systems have had little effect outside of the country in which they reside. Too often, while providing a measure of social justice for their own citizens, these countries continue to steal the wealth, resources and labor of third world countries and contribute to the serious and growing poverty that exists there. Their own wealth is much more important to them than making a real effort to eliminate world poverty, and because of that they continue to exacerbate that growing poverty problem.
The fact is that this earth that we all share has a finite amount of resources. In a fair and just world those resources would be shared equally by all peoples of the world, but human greed has prevented that. For some inexplicable reason we have decided it is OK for a few wealthy people to own far too much of the world's wealth and resources, and to exploit those who have too little of that wealth. This even seems to be OK with many religious people who claim to believe that we are our brother's keeper.
Can poverty be eliminated? I honestly don't know. What I do know is that we have yet to make a real effort to do so. To make a serious effort at eliminating poverty, those in the richer countries are going to have to be willing to share more and even alter their own lifestyles so they are not using more than their fair share of this earth's resources. So far, they have been unwilling to do that.
There is a documentary (and accompanying website) called The End of Poverty that has, through consultation with economic experts, come up with a reasonable way to attack the problem of world poverty. They are asking people to sign their petition and get on board with their efforts to address this problem. They also ask people to boycott corporations that will not endorse their 10-point plan to end poverty and to not vote for any politician who will not endorse and support at least half of those points. I have listed their 10-point plan below. What do you think of it? Are you willing to do your part?
1. The full equality between men and women in public as well as private areas of life, a worldwide minimum wage of $20 per day and the end of child labor under the age of 16 with the creation of a subsidy for scholarship.

2. The guarantee of shelter, healthcare, education, food and drinking water as basic human rights that must be provided free to all.

3. A total redistribution of idle lands to landless farmers and the imposition of a 50% cap on arable land devoted to products for export per country, with the creation of a worldwide subsidy for organic agriculture.

4. An end to private monopoly ownership over natural resources, with a minimum of 51% local communal ownership in corporations, which control such resources as well as the termination of intellectual property rights on pharmaceutical drugs.

5. The cancellation of third world debt with no reciprocal obligations attached and the payment of compensation to Third World countries for historical as well as ecological debt.

6. An obligation of total transparency for any corporation with more than 100 employees and a 1% tax on all benefits distributed to shareholders of corporations to create unemployment funds.

7. The termination of tax havens around the world as well as free flow of capital in developing countries.

8. The cancellation of taxes on labor and basic consumption, the creation of a 2% worldwide tax on property ownership (expect basic habitation for the poor) and the implementation of a global 0.5% flat tax on all financial transactions with a total prohibition of speculation on food products.

9. An equal voting for developing countries in international organizations such as IMF, World Bank, WTO, and the termination of veto right for the permanent members of the UN Security Counsel.

10. A commitment by industrialized countries to decrease carbon emission by 50% over a ten-year period as well as reducing by 25% each developed country’s consumption of natural resources.
Posted by Ted McLaughlin at 12:04 AM