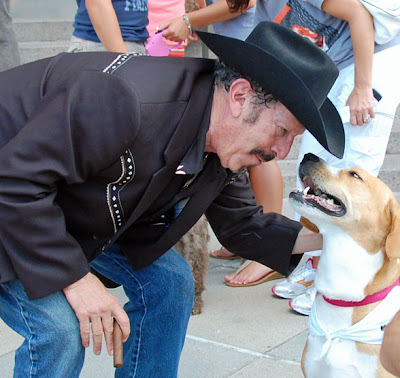 I don't know how I missed this major news story. It seems that Texas songwriter, singer, author, comic and ex-candidate Kinky Friedman has officially thrown his support behind a candidate for governor of Texas in the 2010 election. Kinky made his endorsement on the steps of the state capital on July 6th in front of the cameras.
Kinky said of his candidate, Woodrow, "Woodrow's authentic, doesn't overcomplicate things, has good instincts and the personal charisma Bill White's supporters are longing for. Plus, Woodrow is zero percent coyote, so he can definitely take on Rick Perry in a general election." The Kinkster went on to say, "Woodrow is not an incumbent, and he hasn't even been indicted yet, and I don't think I'm going to regret this endorsement one bit."
The candidate named Woodrow (pictured above with Kinky) is a formerly homeless dog whose owner has declared his candidacy in an effort to raise funds for Austin Pets Alive! ( a nonprofit organization dedicated to implementing "no kill" programs in Austin for homeless animals). Woodrow's owner said this gave her an opportunity to voice her distaste for politics and raise money for a good cause at the same time.
As an animal lover and founder of the Utopia Animal Rescue Ranch, Kinky found the issue (and the campaign) to be one close to his heart. His endorsement of Woodrow was filmed and will eventually be turned into a commercial for Austin Pets Alive!.
Woodrow's campaign slogan is a take-off on an old Kinky slogan from his first run for governor -- "How Ruff Could It Be?".
Posted by Ted McLaughlin at 12:06 AM