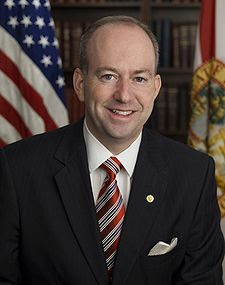 If anyone needed any more proof that the Republicans are trying to damage the economy and make sure there is no economic recovery before the November elections, then the Senate Republicans provided that last Thursday. These Republicans, who like to pose as the defenders of small businesses, voted to continue to block a bill that would have provided expanded loan programs and tax breaks for small businesses.
The bill, favored by such Republican supporters as the U.S. Chamber of Commerce and the National Federation of Independent Business, needed 60 votes to break the Republican filibuster and allow a vote for passage. It got 58 votes -- all of them Democrats. All Republicans voted to block the bill, including Senator George Lemieux (R-Florida), who helped to write the bill. (Lemieux is pictured).
Why did the Republicans block this bill (which many of them and their supporters think is a good bill)? Because they know that most jobs are created in this country by small businesses. The bill would have created a $30 billion lending program in the Treasury Department just for small businesses, and given those small businesses another $12 billion in tax breaks. This bill could be a real boon for job creation in this country.
But the Republicans don't want new jobs to be created before November. They want the recession to continue unabated until the election, in the hopes that voters will blame Democrats for not improving the economy. They don't really have any new policies of their own (except for more tax breaks for their rich friends) and they know that an improving economy will probably help the Democrats in the coming election.
To make a long story short, the Republicans are pinning their election hopes on keeping the recession going through November. I hope all the millions of unemployed Americans and hurting small businesses remember these mean-spirited actions by the Republicans when they vote this Fall. These senators were sent to Washington to make things better for Americans -- not block an economic recovery in the hopes of political gain.
Posted by Ted McLaughlin at 12:06 AM