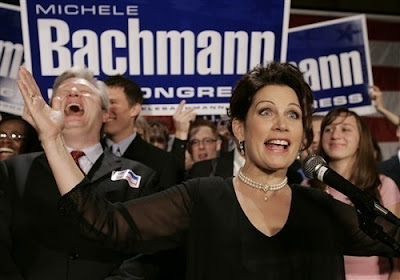 A few days ago one of the biggest nuts in the U.S. House of Representatives decided to form her own House caucus. Rep. Michele Bachmann (R-Minnesota) got permission from the House to form a teabagger caucus and immediately named herself as the caucus chairwoman (Queen?).
The teabagger caucus held its first meeting last Wednesday, and it has now grown to include 32 members -- all of them Republicans. Sadly, seven of those new members of this nutty caucus are Texans -- although this doesn't really surprise me. Texas has as many (or more) nutjobs in Congress as any other state.
The only thing that does surprise me is that the Panhandle's congressman, Mac Thornberry, is not a member of the new teabagger caucus. I figured he would join, if for no other reason than to take the sting out of his teabagger opponent in the November election (who is running as an independent). Maybe his invitation got lost in the mail.
Some think the Republicans have done this to get some extra votes in November. That is just not true. The teabaggers are just angry Republicans (and are used to voting Republican, as they did in 2008). What these teabagger congressmen are really trying to do is hang on to their own Republican voters (who are angry enough to desert the party and vote for some right-wing independents).
Here are the congressmen who have joined the teabagger caucus so far: