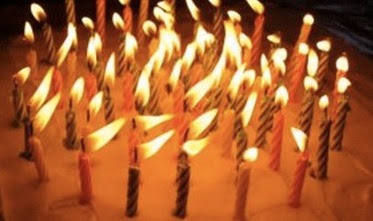 Today another year has gone from this joke I refer to as my life.   In other words, today is my birthday!   I won't give you the number of years I've been around, but I'll give you a couple of clues.   If I put one candle on a cake for each year, I'd have to have the Fire Department standing by because it would create an unacceptable fire hazard.   And according to the federal government, I have one more year to go before they consider me officially an old fart.

I'd love to take all my readers out for a night of wild drinking and carousing, but alas, I'm living on a fixed income and my creditors think I should send them the money instead (they're weird that way).   So I guess I'll just stay home and eat the birthday meal my son is preparing for me -- meat loaf, pinto beans, mashed potatoes and cheesecake (my favorite kind of "cake").

I know that sounds like a diet-buster, but isn't there some law somewhere that says diets don't count on your birthday?   If there isn't, then there should be.   I think my doctor and my daughter (a founding member of the diet police) can forgive me for one day of excess.   I promise I'll be good tomorrow (or at least the day after the cheesecake is all gone).

As you've probably noticed, I'm taking the day off from blogging (except for this silly post).   I don't want to think about Republicans or other mean people on this day.   I'll be back to posting what passes for wisdom in my rather abnormal brain tomorrow.
Posted by Ted McLaughlin at 12:02 AM

Email ThisBlogThis!Share to TwitterShare to FacebookShare to Pinterest
Labels: birthday