Chisum's "Marriage Tax" Is A Failure 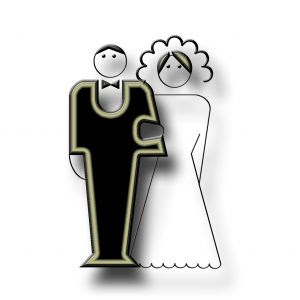 Those of you who live in Texas may know State Rep. Warren Chisum (R-Pampa) as the right-winger who is trying to unseat Speaker of the House Joe Straus (R-San Antonio).   Chisum doesn't like Straus supposedly because he is a "moderate" Republican.   That's ridiculous, of course.   While Straus is a fairer speaker than the Texas House has had in many years, he's definitely a conservative.

Chisum is the kind of nut that thinks he was sent to the legislature to save souls -- that is, push his brand of fundamentalist christianity on all his fellow Texans (whether they want it or not).   To see this, all you have to do is look at the kind of bills he introduces.   He was able to wrangle two bills through the legislature in the last session (although thankfully the worst aspects of them were removed or toned down by his fellow legislators before they were passed).

The first was a bill to require the teaching of a Bible class in all Texas high schools.   Chisum wanted this to be a required course that all Texas teenagers would have to take to graduate.   The bill was passed and all Texas high schools must offer a Bible course, but the course was changed to be an elective course and no one has to take it that doesn't want to.

The second bill that he got passed was nicknamed the "marriage tax", because it double the state fee for a marriage license to $60 -- unless the couple received pre-marital counseling.   This was a thinly-disguised effort to get people into religious counseling (since most pre-marital counseling courses are offered by churches and taught by ministers here in Texas).   Of course, the couple could opt to pay for a secular counselor (but that would cost at least as much, if not more, than just coughing up the $60 fee).

The new law has been a dismal failure.   The statewide figures for those who opted to take the pre-marital counseling instead of paying the increased fee are incredibly low -- less than 15%.   That's probably about the same number that would have taken the counseling without the new law and increased license fee.   And in some urban counties, the figures are even lower.   Tarrant County (Fort Worth) shows less than 10% of couples opted for the counseling, and in Harris County the number was only about 5%.

I'm sure some right-wingers will claim that even though the law did not get significant numbers of couples into marriage counseling, it at least increased the amount of money fed into the state's coffers.   That's just silly.   The amount of money raised by the state on marriage licenses is negligible when compared to the enormous state budget.

The fact is that the "marriage tax" law is as miserable a failure as Chisum is as a legislator.
Posted by Ted McLaughlin at 12:02 AM