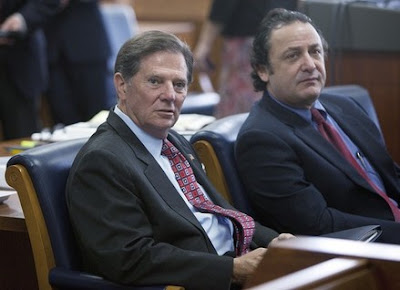 I must admit that I figured Tom Delay, former GOP House leader and poster boy for corrupt politics, would probably get off without being convicted of the crimes he had been charged with five years ago.   I'm happy to say I was wrong.   Yesterday a Travis County (Austin, Texas) jury, after 19 hours of deliberation, convicted Delay of money laundering and conspiracy to launder money.

Sentencing has been set for December 20th in Austin, and the judge in the case has a wide range of sentences he could impose.   The most serious of the two charges is money laundering.   The judge could sentence Delay to as little as five years or as much as a life sentence on that charge (parole is possible after 30 years on a life sentence).   I doubt Delay will get a life sentence, but 5 or 10 years is a distinct possibility.

This whole thing comes from Delay's believing he was so powerful that he no longer had to follow the rules and laws that applied to others.   Back in 2002, Delay tried to pull an end-run around the campaign laws in Texas.   The law said a corporation couldn't give money to a political candidate's campaign, so Delay took the corporate money and funneled it through the RNC and then to the campaigns of Texas politicians -- a clear violation of both the letter and intent of the law.

Now, years later, it is time for Delay to pay the piper for his corruption.   Delay was obviously shocked at his conviction and tried to pass it off as just politics.   He said,   "This is an abuse of power.   It's a miscarriage of justice.   And I still maintain that I am innocent.   The criminalization of politics undermines our system."

That's just nonsense.   The District Attorney was not playing politics, but bringing a criminal to justice.   To prove that point, the DA pointed out that they had just convicted another politician of corruption less than a month ago -- a Democrat (Kino Flores).   DA Rosemary Lehmberg said,   "This case is a message from the citizens of the state of Texas that the public officials they elect to represent them must do so honestly, ethically or they will be held accountable."

Delay is now being held accountable.   I don't know if it's possible, but I hope his sentence is not probated.   Giving him a few years of jail time will remind all politicians (of all parties) that they are not immune to the laws all other citizens must follow.   Besides, he'll look great in a prison jumpsuit.
Posted by Ted McLaughlin at 12:02 AM