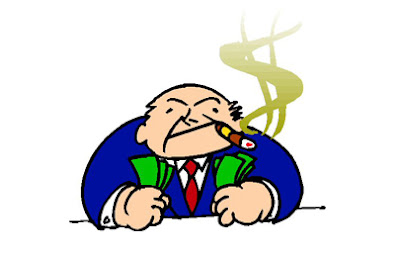 There's a myth that runs rampant through this country.   It is the myth of opportunity that says anyone can become rich in America.   It's not true -- most people will never have the opportunity to become rich (but belief in the myth may partially explain why so many poor and working Americans are willing to give the rich whatever they want, including seemingly endless tax cuts).

The truth is that out of over 300 million Americans less than 1% are millionaires, and that 1% has an inordinate amount of control over what happens in this country.   How can that be?   Well for starters, over half of Congress is made up of millionaires (and the other half know it's the rich that fund their campaigns for the most part).   By cutting taxes for the rich, Congress is cutting taxes for themselves (and their rich donors).   That's why the odds are very good that we'll probably see an extension of the massive Bush tax cuts for the rich, even though it is common knowledge that those cuts would increase the country's deficit.

But it seems that not all of the rich are so greedy that they demand an extension of tax cuts that would hurt America at a time the country can least afford it -- in the middle of a serious recession.   I posted a few days ago about billionaire Warren Buffett telling ABC News that the rich need to pay more taxes rather than less.   He thought it was only fair to expect those who have made the most to pay the most.

Now a group of 40 millionaires have stepped forward to say the Bush tax cuts should not be extended for those making $1,000,000 a year or more.   They call themselves the Patriotic Millionaires for Fiscal Strength, and they have gotten together to send the following letter to President Obama.   The letter says:

We are writing to urge you to stand firm against those who would put politics ahead of their country.
For the fiscal health of our nation and the well-being of our fellow citizens, we ask that you allow tax cuts on incomes over $1,000,000 to expire at the end of this year as scheduled.
We make this request as loyal citizens who now or in the past earned an income of $1,000,000 per year or more.
We have done very well over the last several years. Now, during our nation's moment of need, we are eager to do our fair share. We don't need more tax cuts, and we understand that cutting our taxes will increase the deficit and the debt burden carried by other taxpayers. The country needs to meet its financial obligations in a just and responsible way.
Letting tax cuts for incomes over $1,000,000 expire, is an important step in that direction.
I wish I could say this was a common belief among the rich, but it isn't.   This is only forty people out of nearly 3,000,000.   It looks like most millionaires care only about putting a few more dollars in their own bank accounts, regardless of the fact that their country needs the money much more than they do.   They're quite willing the leave their other 297,000,000 countrymen out in the cold (and that includes a bunch of rich congressmen).
Posted by Ted McLaughlin at 12:02 AM