Another #1 I Wish Texas Didn't Have 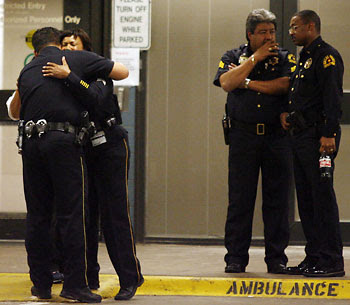 During 2010, there were 19 police officers killed in the state of Texas.   It is the third year in a row that Texas has been in the top five states in police fatalities.   California had 11 police deaths and Florida had 9 police deaths -- and both of those states have joined Texas in the top five for the last three years.

The death of even one police officer is too many, but the fact that it is fairly normal for as many as 160 officers to be killed in a single year is horrifying.   It brings home just how dangerous a job we expect them to do (and which they do very well) for very little pay.

I know there are a few officers who step over the line each year and make all police officers look bad.   But the truth is that most officers do an excellent job, and put their lives on the line every day to make this a safer world for the rest of us.   It wouldn't hurt us to take the time to say thank you to the next officer we see.
Posted by Ted McLaughlin at 12:02 AM