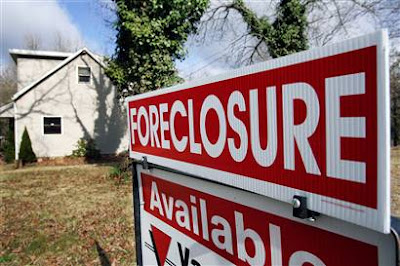 The pundits and the politicians would like for Americans to believe the country is finally beginning to pull itself out of the recession.   After all, Wall Street and the huge corporations are doing great.   They are making record profits and getting record bonuses.

But don't let that fool you.   For most Americans the recession rages on.   The unemployment rate is still very high and shows no chance of improving any time soon -- the real rate being somewhere near 18% (approaching the levels of the Great Depression).   And corporations keep sending more and more good American jobs to other countries (where they can exploit the poverty wages being paid in those countries).   The truth is it could take years, if ever, to replace the millions of jobs lost in the last three years.

That means the number of foreclosures currently in progress has now climbed to a whopping 1.2 million homes.   That's a 10.1% increase over one year ago, and the figures a year ago were already too high.   The recession isn't just continuing for many Americans -- it's getting worse.

With record numbers of jobless and homeless Americans, is it any wonder that currently at least 14% of the population finds it necessary to go on food stamps to feed their families -- a number that is growing with each passing month?   And what is the solution being offered by Congress?   Massive tax cuts for the rich -- the only people in America who don't need help.

The last election showed that Americans are angry -- with both political parties.   And they should be.   It seems like the politicians of both political parties had lost contact with reality (and with real Americans).   Ordinary Americans need help.   They are not getting it from Washington, DC.   And with Republicans, who demanded the tax cuts for the rich, taking over the House of Representatives things are not going to get any better in the next two years.

Americans might as well get used to the pain.   It's not going away soon.
Posted by Ted McLaughlin at 12:04 AM