"Rosie The Riveter" Dies At Age 86 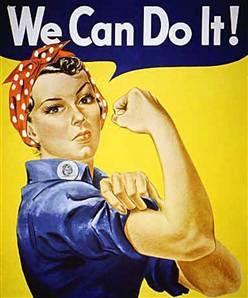 The above picture is of one of the most famous World War II posters produced in America.   It was painted in 1942 by J. Howard Miller for the United States government, and was used to motivate the civilian population to join the war effort -- especially to recruit women to work in war production plants.   Most Americans came to know the woman pictured as Rosie the Riveter.

Her real name was Geraldine Doyle.   As a 17 year-old she was hired as a metal presser in a steelworks factory, and a UPI photographer took her picture when he toured the factory.   Artist J. Howard Miller later used that picture as the model for his painting for the government.   The strange part is that even though the poster was widely distributed and has achieved a certain fame in American pop culture, Doyle never knew she had been the model it was based on for over 40 years.

Perhaps the strangest part of her story is that she only worked at the factory for about two weeks.   When she heard of another woman injuring her hand there, she quit and went to work at a soda fountain and book store.   She was a cellist and didn't want to take the chance of hurting her hands.   She later married a dentist and had five children.

Last Sunday she died at the age of 86 in Lansing, Michigan.   While she may have only worked in a defense factory for a couple of weeks, her picture inspired countless Americans and was invaluable to the civilian war effort.   And she died as a pop culture icon.   Her alter ego as Rosie the Riveter will live forever.
Posted by Ted McLaughlin at 12:02 AM