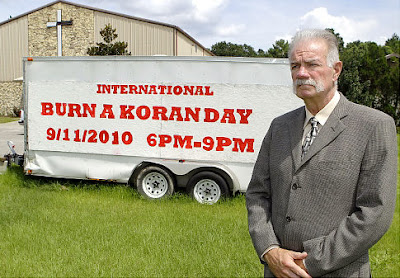 You may remember hate-filled preacher Terry Jones of Dove World Outreach Center in Gainesville, Florida. He's the preacher that made headlines by arranging to burn the Koran last September 11th (a threat he didn't follow through on). This nut has made it his mission to preach hatred toward another religion -- islam.

Well, now Jones wants to take his message of hate to the United Kingdom. He has been invited to go there and preach his anti-islam message by the England Is Ours group (a British-based hate group). But he has a problem. The government of the U.K. doesn't want him in their country spreading his hate. And last week they denied him entry into their country.

British Home Secretary Theresa May banned Jones entry into the country saying the government "has the right to exclude people who are not conducive to public good or on national security grounds." A British Home Office spokesman said Jones had been barred because his "numerous comments. . .are evidence of his unacceptable behavior."

Of course, Jones is incensed by this. He said being banned from entry into the U.K. sabotaged his "rights of freedom of speech and freedom of expression." I have to wonder just what rights he is talking about. Someone needs to tell him that his constitutional rights are only applicable in the United States. The British don't have to extend him any rights or courtesies that they don't want to extend.

Frankly, I don't blame the U.K. for banning him. Jones is just a hatemonger and a trouble-maker, and would just cause problems for them.
Posted by Ted McLaughlin at 12:06 AM