The King Of Hypocrisy Lives In Texas 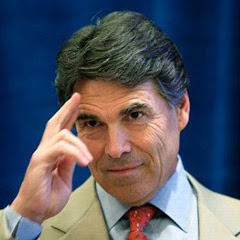 The Texas legislature has a lot on its plate for this biennial session. The state must redistrict its state and federal congressional districts, and somehow must cover a $27 billion shortfall in the state budget for the next biennium. That's going to take up most of the legislators time in the session that by law lasts only a little over four months. But the governor, Rick Perry (pictured), has decided he must also play to the right-wing fundamentalists by also attacking a woman's right to control her own body.

Perry wants the legislature to pass a sonogram law, and he's declared it an "emergency" item to make sure the legislature addresses it. This law would force all women seeking an abortion to take and view a sonogram. The idea is that if a woman was forced to view a sonogram, she would refuse to go through with an abortion. It's a mean-spirited law, and totally ignores the fact that this is already a decision that women have given much thought to. It also seems to make no difference to Perry that this same law was passed in Oklahoma, and declared by a federal court to be unconstitutional. Perry says:

"When you consider the magnitude of the decision to have an abortion, ensuring that the patient understands what's truly at stake seems a small step to take. When someone has all the information, the right choice - the choice of life - becomes clear. Now our legislature can take fast action on this important bill because we all know when it comes to saving lives, every second counts."

For Perry to say that he cares about "saving lives" is the height of hypocrisy. Under his leadership, the state of Texas has shown little interest in the lives of ordinary Texas citizens. The federal government had to force Texas to cover poor children with medical insurance and it looks like the legislature, with the governor's blessing, is going to cut that insurance coverage (and the state has the highest percentage of adult without health insurance of any state).

Then when a child gets to school, Texas provides one of the lowest per student funding of education in the nation. And they are already discussing cutting that already anemic funding by another $9 billion. Education is not a priority with Perry and his cronies.

And neither are poor people, the mentally ill and disadvantaged, those without jobs, abused children and elderly people, nursing home residents, or the state's environment. All of those will be hurt by the budget slashing by Perry and his Republican friends in the legislature.

Then we come to the death penalty. Perry has presided over the most legalized state killings of any governor in the country, and he fully supports the continuation of this killing. It is little more than a cruel joke for Perry to be talking about "saving lives". While he preaches about saving a bit of protoplasm, he has no interest in helping actual people to live better lives (or go on living at all).

If he is not the King of Hypocrisy, he is certainly a leading contender for the title.
Posted by Ted McLaughlin at 12:02 AM