Rainy Day Fund Should Be Used 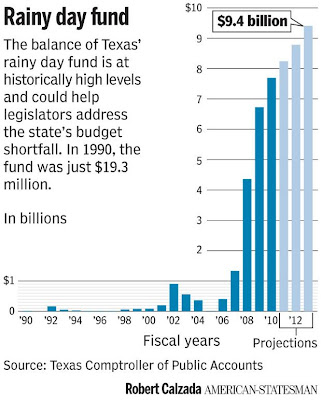 For the last twenty years the state of Texas has had a rainy day fund -- a sort of government savings account that can only be used in an economic emergency. The fund is made up of some oil & gas taxes and any surplus from the state budget in a good biennium. Although the fund has been tapped a couple of times in the past, it has never been as large as it currently is.

The fund has traditionally been less than a billion dollars. However, the discovery of new natural gas fields and high consumer prices for oil and gas has caused the fund to balloon since 2007. There is presently around $8 billion in the fund, and by the end of the next biennium the state comptroller projects the fund will have as much as $9.4 billion.

The Republican governor and legislature campaigned on a platform of no new taxes in the last election, even though no one knew just how large the budget shortfall would be for the next biennium. It turned out that shortfall was larger than expected -- a whopping $27 billion. The Republicans are still saying they can make up that shortfall without any new taxes (although they are already talking about raising fees on nearly everything -- as though those weren't taxes). But inexplicably, they are also saying the rainy day fund should not be used to help balance the budget.

Instead, they are recommending massive cuts in state programs -- especially in the areas of education (where as many as 100,000 teachers and school employees could be laid off) and health & human services (making life much harder for the poor and working classes, especially the children). While some cuts to state programs may be unavoidable in this recession, there is no need for the massive cuts being talked about by the Republican legislature.

The problem is that the right-wingers are in charge in Austin. They have never liked programs that are funded by tax dollars, regardless of who those programs help (except of course for corporate welfare). They see this as a golden opportunity to abolish or massively defund many state programs, and they don't really care who gets hurt in the process.

The truth is that the proposed massive cuts are simply not needed. A combination of the use of the rainy day fund and a broadening of the sales tax base (along with small raises to most fees) could take care of most of the budget shortfall. But that wouldn't let the right-wingers use the shortfall to impose their hard-hearted agenda on the backs of ordinary Texans, so it probably won't be done.

The massive cuts they want will not help the Texas economy. It will ripple through the economy and cause unemployment to rise, children and others to go without health care, classroom sizes to grow, dropout rates to climb, college costs to rise, decrease protection from abuse for children and the elderly, decrease help for the blind, and generally hurt ordinary Texans.

It is beyond hard-hearted that these kind of massive cuts are even being considered -- especially since the rainy day fund has $9.4 billion. That fund should be used. Not using the fund should not even be considered in the present economic emergency.
Posted by Ted McLaughlin at 12:02 AM