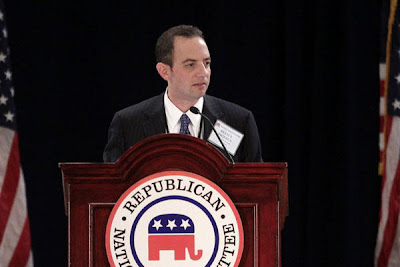 Under the leadership of Michael Steele the national Republican Party wasn't doing too well financially. The donations had steeply dropped off, and after the 2010 elections the party was left about $25 million in debt. It was the first time in many years that the Republicans would start a new campaign cycle in debt.

But the Republican National Committee (RNC) booted Steele out of his chairmanship in January, and replaced him with Prince Priebus (pictured above). They evidently came to the realization that raising money was more important than having a token minority as leader of the party -- that didn't change anyone's perceptions about the nearly all-white party anyway.

And it is beginning to look like the change may be working. During the month of January, the Republicans took in $5.7 million in donations -- and $3.5 million was done after Priebus took over as chairman of the RNC. The party is still in financial trouble though. They finished January with only $2.1 million on hand and an outstanding debt of $22 million ($7 million owed to vendors and $15 million in loans from the last election). It looks like it could still take them a while to dig out of debt and start putting money in the bank for the 2012 election.

The Democratic National Committee (DNC) is in better shape. They raised more than the Republicans in January -- raising a total of $7.2 million. They finished the month with $9.1 million on hand and an outstanding debt of about $16.8 million (mostly in loans for the last election).

It's a good sign that the DNC is still raising more than the RNC, because they'll need that extra money to counter the corporate spending in the next election (thanks to the misguided Citizens United vs FEC decision by the Supreme Court).
Posted by Ted McLaughlin at 12:04 AM