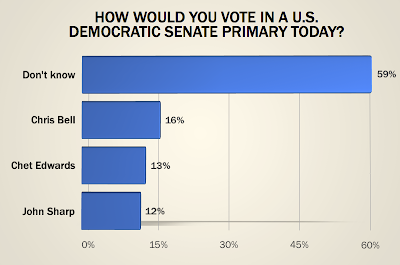 When U.S. Senator Kay Bailey Hutchison announced recently that she would not be running for re-election in 2012, there began an immediate buzz over who her replacement might be. A whole passel of Republicans have indicated they are interested in the job, and there might be even more before long. But so far, the Democrats have been pretty quiet.

It may be because the Democratic Party was trounced soundly in the 2010 election in every single state-wide race, but no one has come forward yet to declare they are interested in replacing Hutchison. Right now three names are being bandied about. They are John Sharp (who expressed interest when it was thought Hutchison might resign a couple of years ago to run for governor), Chris Bell (who was soundly defeated for governor in 2006), and Chet Edwards (who lost his congressional seat to a teabagger in the last election).

Frankly, none of them excites me very much. They are all "blue dog" conservatives who would do little to help the Democratic agenda in Washington, DC. It looks like the state party hasn't learned its lesson yet, if these are the best names they can come up with. They still seem to think the best way to beat a Republican conservative is with another conservative, when in reality, the best opportunity they would have is to offer the people a real choice -- a progressive who will expose the shortcomings of Republican "trickle-down" policies.

And as the above chart shows (compiled from a University of Texas/Texas Tribune poll), none of these blue dogs has caught on yet with Democratic voters. Bell is garnering the support of 16% of Democrats, while Edwards support comes in at 13% and Sharp's is at 12%. A whopping 59% of Democrats are still waiting for a better candidate. Personally, I'm with that 59% and I'm still hoping a progressive candidate will step forward. I wouldn't mind seeing David Van Os make a run for the office.

Meanwhile, the Republicans are falling all over themselves trying to get their names out there early. So far, six have expressed some interest in the job and it wouldn't surprise me if some more didn't get in the race soon. Here's how they stack up with Republican primary voters so far:

As the figures show, the race is wide open in both parties. Dewhurst has the advantage among Republicans, but he is far from wrapping up the nomination. The 2010 result might make some think this senate seat is a shoo-in for the Republicans. I don't think so, unless the Democrats run a very weak candidate (like one of the three mentioned above). A good Democratic candidate could excite the electorate and also take advantage of the increased turnout of a presidential election -- especially if the state party would do a concerted registration and GOTV effort across the state.
Posted by Ted McLaughlin at 12:02 AM