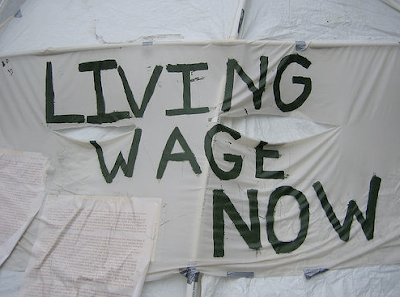 There has been a disagreement in this country for quite a while about whether it is possible for businesses to pay a fair and livable wage to workers and survive. Many business leaders and politicians on the right say wages must be kept low. They even opposed a minimum wage law (which certainly doesn't guarantee a livable wage), saying it costs forces businesses to lay off workers or go out of business. Labor representatives disagree. They point out that rises in the minimum wage have not been shown to cost jobs, and urge the minimum wage be raised to give all workers a livable wage.

The public seems to go back and forth on this, and right now the pendulum has swung to favor the position of business. This has been true since the Reagan presidency, when policies began to be put in place that favored the corporations and the wealthy. This was done by convincing many people that when business had lots of money they would share the wealth by creating jobs and raising wages. It was called the "trickle-down" theory, and it has been a failed policy.

Instead of creating new jobs and raising worker wages, businesses have just squirreled away the extra money in their bank accounts or used it to play the stock market. And while they got much wealthier, the wages of workers have been stagnant for many years. Workers now have less buying power than than did in the early seventies (or earlier). But business still claims they would be mortally wounded by having to pay higher wages. Is this true?

Take Wal-Mart for instance. This discounter has made billions by keeping their prices low (and by paying their employees some very low wages). Wal-Mart has 1.4 million workers in the United States.  The company says that paying it's workers a livable wage (defined as about $12 an hour) would force them to have to raise their prices to an exorbitant level, and it is easy to believe that paying that many workers several dollars an hour more could do that. After all, that's a lot of workers and would take a lot of money.

But while their argument may seem to be reasonable on its face, it is simply NOT TRUE. A new study shows that low-wage employers like Wal-Mart could pay their workers a livable wage without threatening their profitability. The study was done by ken Jacobs and David Graham-Squire at the UC Center for Labor Research and Education, and by Stephanie Luce at CUNY's Murphy Institute for Worker Education and Labor Studies.

They found that the average Wal-Mart shopper would pay about 46 cents extra per shopping trip -- or about $12 dollars per year (not exactly a back-breaking rise in prices). They estimate that the wages could be covered by only a 1% price hike (or no price hike since that is well below the mark-up margin). That means an item that had cost $1.00 would go up to $1.01 (or a $10.00 item would be $10.10). And according to these researchers that would be the "most extreme estimate" (meaning it would probably be even less).

This blows the old "we can't afford to do it" argument out of the water. They could afford to do it, and so could most other low-wage businesses. They just don't want to do it. They don't really care about their workers, and if it weren't for the minimum wage laws (which have driven wages up to their current pitiful level) they would happily pay even less. They couldn't care less whether their workers have a decent standard of living.

Some might make the argument that the price raises would hit the poor hard. But only 28% of Wal-Mart shoppers can be classified as poor, and the slight increases would significantly impact even them. However, it would help the poor (who would get about 40% of the additional income -- an additional $1,670 to $6,500 a year).

It's time to discard this specious argument being made by business (and their Republican politicians). It would not break business to pay a livable wage, but it would be a huge boost to lower-paid American workers (and would probably actually benefit business since these workers would have more money to spend on their goods and services).

We don't need to lower or abolish the minimum wage. We need to raise it substantially.
Posted by Ted McLaughlin at 12:06 AM