Have Dems Chosen Sanchez To Run For Senate In Texas ? 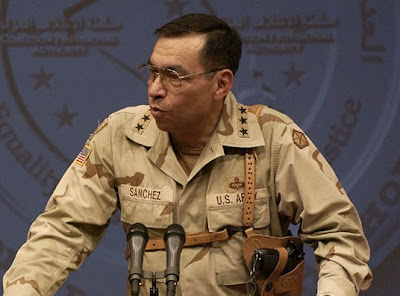 Yesterday I posted about the proposed targeting of the senate seat in Texas being vacated by Kay Bailey Hutchison by the Democratic Senate Campaign Committee (DSCC). DSCC chairwoman, Senator Patty Murray of Washington, said Texas was one of six states the committee is going to pump money into in an effort to take a senate seat currently being held by a Republican -- and she said they were close to announcing a candidate.

I had my doubts that a credible candidate could be found that would appeal to voters across the state -- after all, the Democrats haven't held a statewide elected office in over twenty years. I may have been wrong. The political blog Three Wise Men is now reporting that the candidate the DSCC has approached is Lt. General Ricardo Sanchez (pictured), who was not only born in Texas but returned to live in the state after his military retirement.

I'm sure I may disagree with Lt. General Sanchez on some things (but I have never met the person I agree with on everything). Actually I am pretty excited about him being named as a candidate. He's an honest man, a good leader, and a war hero. In addition, he could unify the large Hispanic vote in Texas and also appeal to many independents (who are unhappy with Republican policies on jobs, tax cuts for the rich, education cuts, and abolishing of Medicare). Sanchez is a candidate (if he is really the DSCC choice) who could have a chance of winning.

Sanchez started his military career in the famed 82nd Airborne Division and quickly became a platoon leader. In 1977, he transferred from infantry to armor and served in posts in the U.S., Korea, Germany, and Panama. In 1991, he served as a battalion commander in Operation Desert Storm (leading his units to Basra without any casualties). In June of 2003, Sanchez was given command of Combined Joint Task Force 7 (the coalition forces in Iraq), and was in command when Saddam Hussein was captured (and Saddam's sons were killed).

Lt. General Sanchez retired on November 1, 2006 after a distinguished 33 year career in the United States Army, and returned to his native state of Texas. Although not exactly an outspoken military leader, Sanchez has not been afraid to state his own views. He has said the following about the mainstream media:

The death knell of your ethics has been enabled by your parent organizations who have chosen to align themselves with political agendas. What is clear to me is that you are perpetuating the corrosive partisan politics that is destroying our country and killing our servicemen who are at war.

My assessment is that your profession, to some extent, has strayed from these ethical standards and allowed external agendas to manipulate what the American public sees on TV, what they read in our newspapers and what they see on the web. For some of you, just like some politicians, the truth is of little to no value if it does not fit your preconceived notions, biases and agendas.

And he is not happy with the tone of politics in Washington either. He said this about politicians:

Since 2003, the politics of war have been characterized by partisanship as the Republican and Democratic parties struggled for power in Washington. National efforts to date have been corrupted by partisan politics that have prevented us from devising effective, executable, supportable solutions. At times, these partisan struggles have led to political decisions that endangered the lives of our sons and daughters on the battlefield. The unmistakable message was that political power had a greater priority than our national security objectives. Overcoming this strategic failure is the first step toward achieving victory in Iraq — without bipartisan cooperation we are doomed to fail. There is nothing going on in Washington that would give us hope.

I hope Lt. General Ricardo Sanchez is the choice of Democrats to run for the Senate. He has a proven record of independence, intelligence, and leadership. And I believe he could unify the Democratic Party and bring in new voters. He would still have to survive a primary, if chosen by the DSCC, but I don't see any problem there.

The DSCC may have actually done the nearly impossible -- find a viable Democratic candidate to run for Senate in Texas.

NOTE -- A couple of other bloggers, at Brains and Eggs and McBlogger, have a different take on the possible Sanchez candidacy and both are worth reading.
Posted by Ted McLaughlin at 12:04 AM