Texas Republicans And Their Gun Bills 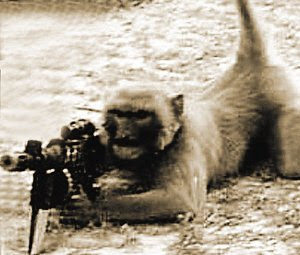 The teabagger Republicans are running the state of Texas. They have their man in the governor's mansion and have fairly large majorities in both houses of the legislature. So it shouldn't surprise anyone that some new gun laws would be proposed -- and I don't mean laws that would restrict ownership or carrying of guns, but instead these would be laws loosening the gun regulations. The only real surprise is that no new gun laws have passed the legislature yet.

For a while it looked like they would pass a law allowing adults to carry concealed weapons on college campuses (even though most college presidents and officials lobbied hard against that bill). But a parliamentary procedure has kept that bill from coming to the floor of the senate for a vote. A bill cannot come to the floor unless at least 22 senators vote to allow it to come up for a vote, and the bill's sponsor (Sen. Jeff Wentworth of San Antonio) was only able to corral about 20 votes.

It looked like that bill might be dead, but NRA-type Republicans are nothing if not persistent. Wentworth found a bill that he thought could get to the senate floor (a bill to allow colleges more flexibility in funding rules) and tried to take his own bill onto it as an amendment. An amendment only needs 16 votes and he could easily get that many.

But he didn't talk to the bill's author, Sen. Judith Zaffirini of Laredo -- a Democrat who is opposed to Wentworth's gun bill. Sen. Zaffirini has withdrawn her bill and says she will kill it before she allows it to go to the floor carrying the college gun amendment. So it looks like Wentworth's second (and sneakiest) attempt to get his gun bill passed has also failed.

This doesn't necessarily mean he won't finally get the bill passed, but it's going to be a lot more difficult now that it has been stopped for a second time. After all, this session of the legislature has a lot of important bills they still haven't passed and time is starting to run out. They still need to finish redistricting, and they need to pass a budget (that makes up for an impending $27 billion deficit).

But while Wentworth's silly bill is having trouble in the Senate, an even dumber bill has just been voted out of a House committee. The Committee on Homeland Security and Public Safety has approved a bill that would allow Texans to openly carry handguns. The bill would simply remove the word "concealed" from the current concealed-carry law in Texas. That means anyone who has a license (which any idiot with a few dollars and no criminal record can get) can wear a gun on their hip (or even two).

And there are plenty of Texans who will start wearing a gun. They all picture themselves as "Rambo" (but really more closely resemble their relative pictured above). They seem to relish a return to the old days when people had shootouts on Main Street instead of relying on law enforcement for protection. About the only good thing this would do is that people can see who's carrying a gun from a distance, and go another direction. Of course the criminals would be forewarned also and probably just shoot first and then rob their dead bodies.

As I have said before on this blog, the Second Amendment does guarantee citizens the right to own firearms. But it doesn't give them the right to be stupid about it, and it doesn't give the legislature the right to create an even more dangerous situation than already exists. Both of these are dumb bills and should never be allowed to become law.
Posted by Ted McLaughlin at 12:02 AM