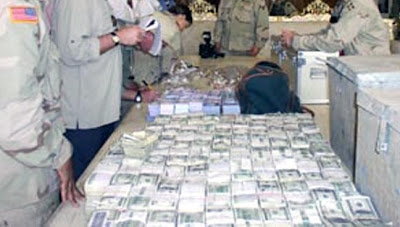 After the Bush administration had invaded Iraq and destroyed its infrastructure, Bush and his Republican cohorts decided to rebuild the country and pay for that rebuilding in cold, hard cash -- $100 bills packed in shrink-wrap and loaded onto pallets. The pallets were loaded onto military planes and flown to Iraq -- with each plane holding about $2.4 billion in United States $100 bills. At least twenty plane loads were sent to Iraq.

As you may have noticed, very little of Iraq has been rebuilt. And a good chunk of that money -- about 3 planeloads ($6.6 billion at least) has simply vanished into thin air. For several years now the Army and State Department officials had admitted to "shoddy" bookkeeping, but said if given enough time they could figue out where the money went.

Well, it is several years later and they still have no idea what happened to that money. They are now admitting that it looks like the money has been stolen. This would make it the largest amount of U.S. currency ever stolen. The problem is that they have no idea who did it. It could have been taken by Iraqis, or by American officials, or by contractors. No one knows.

Making matters even worse is the fact that although the Bush administration played fast and loose with this money, it was not money belonging to the United States. It was Iraq's money, coming "from Iraqi oil sales, seized Iraqi assets and surplus funds from the United Nations oil-for-food program." Now the Iraqis want their money back, and they are threatening to go to court to get it.

That means the American taxpayer will now have to foot the bill for the $6.6 billion theft, because the Republicans couldn't keep up with the billions of dollars in cash they sent to Iraq. In other words, they screwed up the reconstruction as badly as they did the occupation. Is it any wonder that these same Republicans also mishandled the American budget and economy so badly that the nation was thrown into a recession and millions of jobs were lost?

Now the Republicans want Americans to believe they are the party of fiscal responsibility. That idea is more than laughable -- it is completely insane.
Posted by Ted McLaughlin at 12:02 AM