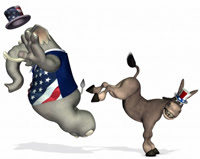 Recent polls have shown that the voters are not really enamored with the Republican Party anymore. It seems that they have pegged their hopes for the next election on the wrong issues. They thought they could strike a chord with voters by making tax cuts and budget cuts their primary issues -- but this is not working out.

It seems the American people are not quite as stupid as the GOP seems to think they are. They are finally figuring out that the tax cuts the Republicans are talking about are not for ordinary Americans -- they are for the corporations and the rich. And the budget cuts are not getting rid of programs that are unnecessary -- but cutting or abolishing good working programs like Medicare and Social Security. And the people don't like what they see the Republicans doing.

The new Bloomberg National Poll (conducted of 1,000 adults between June 17th and June 20th) show movement toward Democrats and away from the Republicans. Here are the top five issues with the public (and as you can see, one far outdistances the others):

The people know that the most important issue facing America is the massive unemployment -- an issue the Republicans are ignoring. The recession will not truly be over until most Americans are back to work. And most Americans see the corporations outsourcing of jobs as the biggest impediment to job creation (78%) -- something the Republicans in Congress have voted to support.

And then there's this question on the poll. What scares you the most about the upcoming election? Here's what the voters said:

Medicare is still turning out to be a really bad mistake for Republicans (who want to abolish it and throw the elderly to the mercy of private insurance companies). About 57 % in this poll said the Republican plan would be bad for them, and 55% say supporting the privatization of Medicare would make them likely to vote against a presidential candidate.

I hope the Republicans continue to do what they're doing. They are driving more people toward the Democrats every day.
Posted by Ted McLaughlin at 12:04 AM