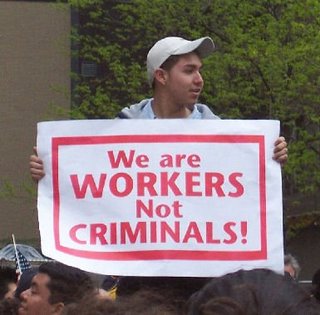 They do this for two reasons. First, immigration is a federal problem that should be dealt with the same in every state by the federal government. Second, by ignoring immigration status of the people they deal with, the police departments of cities and counties have been able to build a relationship with the immigrant community. This relationship is a big help in dealing with crime, since the immigrant community more readily reports crime and acts as witnesses to help the police (and courts).

But the teabaggers in the Republican Party don't care about this. They just want ever harsher laws to deal with the undocumented immigrants, even if it drives these people back underground and makes it harder for the police to fight crime. That is why Governor Rick Perry included a Sanctuary City Bill in the current special session of the Texas legislature. He was trying to pander to his base of voters. It didn't matter that law enforcement leaders in nearly every Texas city opposed the bill.

But it looks like the bill is dead. Not only that, but there probably isn't time to try and attach it to some other bill. Why has it died? Did the Republicans come to their senses? Not at all. It just seems that they forget an important element of their party -- the business community. While the teabagger base loved the idea of harsher laws against immigrants, the business community didn't. That would make it harder for them to find low wage workers for dangerous or dirty jobs. And some in the business community had started to actively oppose the Sanctuary City Bill.

It just goes to show, the real way to a Republican's vote has nothing to do with right or wrong -- it's just money.
Posted by Ted McLaughlin at 12:02 AM