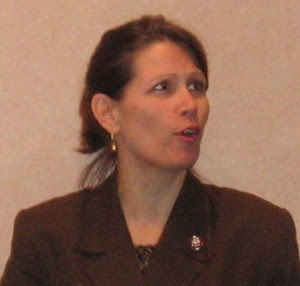 We're already well aware that Michele Bachmann doesn't think the rules she wants to institute for everyone else should apply to her (or her family). She doesn't believe in government payments to private citizens -- calls it socialism. But somehow it's not socialism when it applies to her, such as the thousands of dollars in government payments to the family farm (which she is a part-owner of).

Bachmann has been a fierce critic of the government housing loan programs called Fannie Mae and Freddy Mac (which guarantee about 90% of the housing loans in this country). She has spoken against both programs, and along with her fellow Republicans has even tried to abolish the programs. But her opposition to these "socialist" housing programs didn't stop her from taking full advantage of the program to purchase a fancy golf-course home with her husband. Here's how the Washington Post puts it:

Just a few weeks before Bachmann called for dismantling the programs during a House Financial Services Committee hearing, she and her husband signed for a $417,000 home loan to help finance their move to a 5,200-square-foot golf course home, public records show. Experts who examined the loan documents for The Washington Post say they are confident that the loan was backed by Fannie Mae or Freddie Mac. [...]
The experts said the Bachmanns bought a more expensive home using typical strategies during a time of easier credit. With their existing home still on the market, they assumed liability on the same day for the $417,000 mortgage and a $249,999 secured line of credit backed by the residence, records show.
The $417,000 mortgage was the cap of what Fannie Mae and Freddie Mac would loan at the time in her region.

So she can hit up the government for a $417,000 loan, but she doesn't want any other Americans to have the same opportunity to get much smaller loans to become home owners (which is supposedly part of the American Dream). It's the same old Republican double standard, which says what's OK for a Republican to do is not OK for anyone else to do ( like it's OK for Vitter to be a pervert but not Weiner, and it's OK to raise the debt ceiling for Reagan or Bush repeatedly but not for Obama).

Hypocrisy must be one of those "values" that Bachmann and other Republicans proudly proclaim they believe.
Posted by Ted McLaughlin at 12:02 AM