Time For A "Clean Vote" On The Debt Ceiling 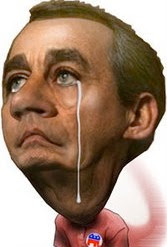 It looks like the orange-colored Republican Speaker of the House of Representatives, John Boehner, has once again proven that he really has no control over his fellow House Republicans. Yesterday was supposed to be the day that he passed his own plan to cut the deficit and raise the debt ceiling. Although the plan could not have passed the Senate without substantial alteration, it would have given Boehner a small bit of political capital in the debt ceiling fight and allow him to save face.

But to get it passed he needed to get most of his Republican cohorts to vote for the ridiculous bill, and that proved to be beyond his control. The teabaggers in the House once again revolted and refused to vote for Boehner's bill, and there were enough of them to insure the bill could not pass -- especially since the Democrats weren't going to help pass it. Finally, Boehner just put off a vote on the bill.

The bill could still be voted on, maybe as early as today. But that assumes that Boehner would be able to corral enough teabagger votes to get it passed, and that is going to be very difficult. Now if the Boehner bill would just die, and with it the ridiculous Reid bill in the Senate, maybe Congress could get down to doing what they should have done in the first place -- just raise the debt ceiling without any amendments or cuts attached to it.

The Congressional Black Caucus has proposed just that. All of their members, except Republican Allen West, have said they support having a clean vote on raising the debt ceiling -- a vote that would do nothing but raise the debt ceiling. And they are not alone. Minority Leader Nancy Pelosi has said she also supports the idea. And yesterday the Progressive Caucus in the House threw their support behing the idea of a "clean debt ceiling vote".

The "clean vote" idea seems to be growing. Now if the Senate Democrats would just get on board with it maybe something could be accomplished. This is the position the Democrats should have supported from the very beginning. President Obama and Senate Majority Leader Reid were wrong to negotiate (give in) to the Republicans on the debt ceiling.

Now that time is running out, I believe Wall Street will pressure enough Republicans to vote for a clean debt ceiling bill to avoid a default because the Republican position is clearly untenable. And if such a bill passes the House, surely Senate Democrats would pass it also.

The time for politics and posturing is over. It's time to raise the debt ceiling.
Posted by Ted McLaughlin at 12:04 AM