No Place To Turn 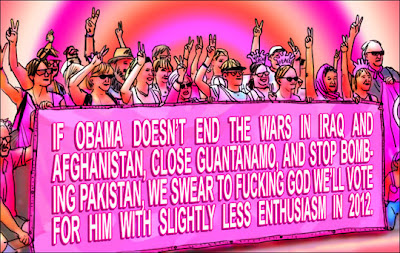 It's no secret that many progressives (myself included) have become disenchanted with President Obama. After running for president on a fairly progressive platform, he has done very little to live up to those campaign promises. Many Democrats want to blame the Republicans for Obama's failure to deliver on his promises, and I don't deny that they have done their best to insure that his presidency fails. But a lot of us just don't think he has really fought. Too often it seems he has just given in to Republican demands.

However, it is obvious that there is not going to be a viable progressive alternative in the 2012 presidential race. It is boiling down to a radical right-wing Republican or a moderately right-wing Obama. As the sign suggests, a lot of progressives will probably hold their noses and vote for him as the least harmful of two bad choices.

For progressives, the 2012 presidential race is pretty much a lost cause for now. The only hope is to concentrate on electing progressives to Congress. If enough are elected, maybe Obama will give in to them like he has the Republicans.

The picture was found on the blog Stupid Evil Bastard.
Posted by Ted McLaughlin at 12:06 AM