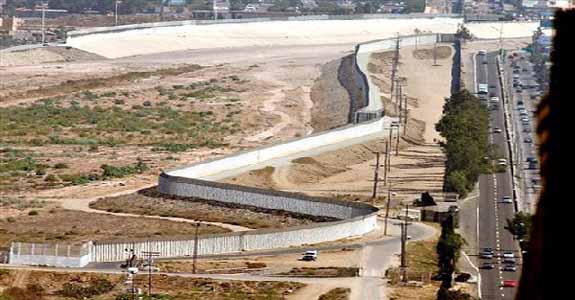 In an obvious effort to appeal to the anti-immigrant and racist wing of the Republican base, several of the GOP presidential candidates have revived talk of building a wall between the friendly nations of Mexico and the United States. This is especially dumb considering the fact that President Obama's administration has deported more undocumented immigrants than the Bush administration did, and the number of immigrants trying to enter the United States has fallen drastically due to the deplorable American economy.

I have discussed in the past about how the border fence is an unworkable solution to immigration problems, that is an insult to our Mexican neighbors and an environmental and economic disaster for both sides of the border. It now turns out that the fence can cause or exacerbate flooding problems in the border area -- flooding problems that are totally unnecessary. before any more building is done, those wanting the silly fence should read this article by Scott Nicol in the Rio Grande Guardian. Nicol says:


In this week’s Republican debate Bachmann, Cain, and Romney each fought to prove that if elected President they would build longer, taller, and more deadly walls than their opponents.


In an effort to please politicians by erecting mile after mile of border wall, Customs and Border Protection (CBP) continues to push for new walls in the floodplain between the Rio Grande and the towns of Roma, Rio Grande City, and Los Ebanos. To convince the International Boundary Water Commission (IBWC) to go along, CBP has tried to paper over the risk of increased flooding with more than a million dollars worth of reports and flood models. Walls in the floodplain are likely to either deflect water into Mexican cities or bottle it up in U.S. ones, and so far IBWC has rejected CBP’s claims to the contrary.


Last June CBP paid Baker Engineering for yet another flood model, which was used over the summer to pressure IBWC to reverse its position. The Sierra Club recently received a copy as a result of a Freedom of Information Act request.


The new flood model makes it clear that no changes in the border walls themselves are being considered. The walls’ locations are the same as those mapped out in a Baker report from 2009. They are still designed to split flood waters, diverting a portion of the flow into these three communities. The only difference is that the newer model uses a different computer program, allowing for more detail.


In 2009 CBP did not know what type of border wall they would like to build, so Baker’s model imagined a solid slab. Now CBP says that they plan to use a bollard design, similar to the walls built to the north of the levees in Cameron County. But in Cameron county the levees would keep flood waters away from the border wall, whereas the new walls would be in the floodplain, where there are no levees, and would be inundated if the Rio Grande were swollen by a major flood.


For this report, Baker assumed that debris in the bollards would block no more than ten to 25 percent of the water. That led to the conclusion that walls would have minimal impacts. But the assumption that between 75 percent and 90 percent of the water in a major flood would pass harmlessly through the wall seems to be based on wishful thinking at best, or a desire to rig the model’s results at worst.


Flooding rivers pick up large amounts of debris, from trash to trees, and carry it along until they encounter an obstruction. Bollards spaced a few inches apart may allow crystal clear water to pass through, but in a flood debris will pile up. As the debris accumulates it blocks more and more water, and the border wall acts more and more like a dam.

This should not be news to CBP. The border walls that they have already built in Arizona, and which they promised would have no impact on flooding, have caused tremendous flood damage.


On July 12, 2008, seasonal monsoon rains swept through northern Mexico and southern Arizona. In the sister cities of Nogales, Sonora and Nogales, Arizona the border wall acted as a dam. In addition to the wall built above ground it was later revealed that DHS had constructed a wall in a storm drain that passes beneath both cities without informing local officials or the International Boundary Water Commission. Water in the storm drain backed up and burst through the roof, adding to the flooding in the streets. Two people drowned, and millions of dollars of damage was sustained by Mexican businesses and residents.


The same storm caused flooding in Organ Pipe Cactus National Monument. CBP had stated categorically that border walls crossing washes in the monument, using a design similar to that proposed for the new South Texas sections, would be water permeable and therefore would not impact flooding. Grate openings six inches high and 24 inches wide that were built into the base of the wall were supposed to allow water to pass through, but they quickly became clogged with debris. The wall then acted as a dam, with water piling up behind it two to seven feet deep. Backed up flood waters then traveled along the wall in search of an outlet, which was found at the Lukeville, Arizona port of entry, causing millions of dollars in damage to private and federal property.


Following this event, Baker Engineering was paid to run the length of the border wall from El Paso to San Diego and produce a report on the problems posed by the many walls that cross stream beds and washes. They documented “debris build-up which sometimes reached a height of six feet.” Their report concluded that, “fencing obstructs drainage flow every time a wash is crossed. With additional debris build-up, the International Boundary Water Commission’s (IBWC’s) criteria for rise in water surface elevations (set at 6” in rural areas and 3” in urban areas) can quickly be exceeded.”


Flood gates were installed, at a cost of over $24 million, in an attempt to prevent a repeat of the 2008 flooding. These gates are massive, and to work require Border Patrol agents to predict a flood, drive into a wash ahead of the water, throw a cable over a bar at the top of the wall, hook it to the top of the gate, and use their Jeep’s winch to pull the gate up. Then the agents need to get out of the wash and get to high ground. If they are not quick enough, they could be swept away or slammed into the wall by raging flood waters. If they manage to get out of the way they may be forced to wait on high ground between flooded washes until the waters recede.


Last August one of the sections of Arizona border wall that CBP had retrofitted with flood gates was knocked over and washed away by the force of flood waters after just over two inches of rain fell. Debris build-up had again turned the wall into a dam, just as it had in 2008. In this case, instead of following the wall to the nearest port of entry, the debris piled higher and higher the water poured over the top like a waterfall. The falling water tore away the wall’s foundation at the same time as the weight and pressure of the water pushed against the wall with increasing force. A 40-foot wide section of border wall fell.

Border Patrol spokesman Lloyd Easterling blamed the wall’s failure on human error, apparently because agents had not gone into washes ahead of the flash flood to open flood gates.


But the problem does not lie with patrol agents who cannot predict the weather, or don’t want to drive into a riverbed during a flood. The problem is higher up CBP’s command structure, with administrators who are so fixated on building walls, and thereby pleasing their superiors, that they overlook a basic fact:


It is time for Customs and Border Protection to face up to the fact that when they build walls in flood-prone areas, they may be able to ignore the impacts on paper, but not in the real world. The walls that they are pushing in Roma, Rio Grande City, and Los Ebanos will have a disastrous impact on the very homeland that they are supposed to protect. Customs and Border Protection needs to ignore political pressure and give up on these last sections of border wall, before they do any more damage.
Posted by Ted McLaughlin at 12:00 AM