Perry Says He Could Beat Obama In Debates 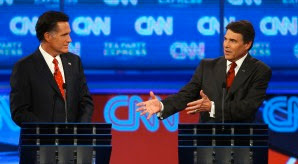 Rick Perry has made a lot of ridiculous claims. He has said Social Security is a Ponzi scheme (and needs to be privatized), that Rep. Ryan's plan to abolish Medicare makes sense, that Texas should not have to meet national education standards, that the EPA is unnecessary and hurts business, that he balanced the Texas budget (when in fact the can was just kicked down the road, that his tax plan is revenue neutral, that Texas could secede from the Union -- the list is almost endless.

But perhaps his most ludicrous claim of all came yesterday as he finally deigned to appear on Sunday television for an interview (on Fox, not a real news channel). He was asked how he would fare against President Obama in televised debates if he became the Republican presidential nominee. He said the following:

"With as many debates as we got coming up, I may end up being a pretty good debater before it's all been said and done. . .I'm not worried a bit that I'll be able to stand on the stage with Barack Obama and draw a very bright line."

Can you believe that? This is the same gubernatorial candidate that was afraid to debate Bill White (whose lack of rhetorical skill could put wild animals into a deep sleep). This is the presidential candidate whose debate skills (or the lack thereof) were exposed by the likes of Herman Cain, Michele Bachmann, Ron Paul, Mitt Romney, and Rick Santorum. This is the man whose popularity in the polls dropped like a rock after voters saw him try to debate. And this is the man who wanted to skip most of the remaining debates (until he saw the negative feedback that idea was getting). He's going to beat President Obama in a debate?

Maybe Perry hasn't been paying attention for the last few years (after all, he's not much of a reader or thinker). But there's little doubt that President Obama is one of the finest speakers and best debaters in this country. His rhetorical skills are superb, even legendary (which even his enemies will admit).

I'm not sure I could even watch a debate between these two men. I've never enjoyed watching totally outclassed teams or individuals being unmercifully beaten (even when I thought they deserved it). The debate would be nothing less than intellectual violence of the highest order, and Perry might even have blood trickling from his ears when he slinked off the stage after it was over. It would be cringe-worthy for the hardiest of debate watchers.

Perry will beat President Obama in a debate about the same time I am crowned Queen of England -- and that won't happen in this lifetime.
Posted by Ted McLaughlin at 12:04 AM