A Few Hippies Or A Nationwide Movement ? 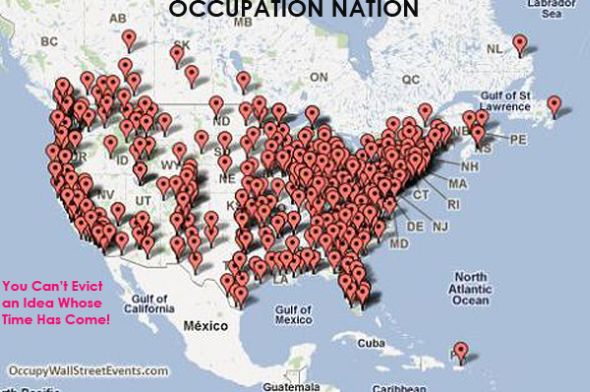 Many of the politicians, especially the Republicans, would like for Americans to think the Occupy Wall Street movement is nothing more than a few hippies raising a little hell. Newt Gingrich even said they should just take a bath and get a job (even though his party, with blue dog help, has systematically destroyed or outsourced millions of American jobs, leaving  a double digit number of applicants for the few jobs available).

The above map shows what an outrageous lie that idea is. Each of the red pinpoints above represents a city where Occupy Wall Street protests have been and are being held. That doesn't look like a few hippies to me. That looks like a nationwide movement demanding change. The politicians of both parties had better start taking this movement seriously, or they could well find themselves part of that change (and out of a job).

NOTE -- This map was found at Daily Kos.
Posted by Ted McLaughlin at 12:00 AM