A Few Things To Consider 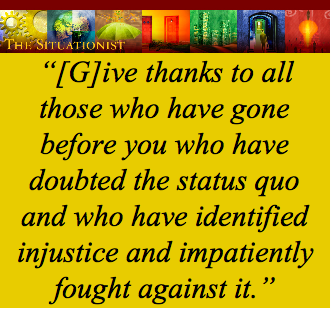 While you are stuffing yourself with some great food, enjoying time with family & friends, and maybe even watching a bit of football today, here are a few things you should probably remember:

* The Labor Department says there are 16.5 million people unemployed in the United States (and that is undoubtably an undercount), and another 8.9 million who are working part-time because they can't find full-time work.

* There are at least 100 million Americans living below or near the poverty line (that's nearly one out of every three Americans). And more than 15% of the U.S. population lives below the poverty line.

* About 49 million Americans aren't sure where their next meal is coming from, and more than 15% of the population is now receiving food stamps (a jump of about two-thirds since 2007).

* While the wages of workers are still stagnant (with buying power diminishing), the cost of a Thanksgiving meal increased about 13% over what it cost in 2010.

And just to put things in perspective, here are a few more facts:

* The wars in Iraq and Afghanistan are costing the American people about $13 million every 40 minutes this year.

* The multi-billionaire Koch brothers increase their wealth by about $13 million every eleven hours.

The Republicans want to continue both of those wars and give the Koch brothers a massive tax cut -- and they want to do it by cutting the programs that help hurting Americans. I can't think of anything more ridiculous or mean-spirited than that.
Posted by Ted McLaughlin at 12:04 AM