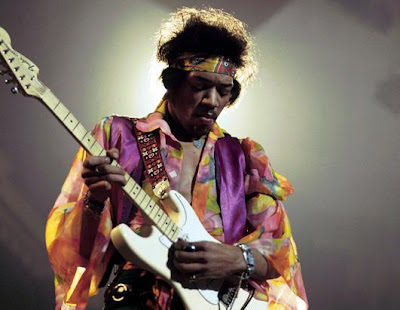 I'm departing from my usual material with this post, but I found this interesting. Rolling Stone has put out a list of the 100 greatest rock guitarists of all time. Of course, any kind of list like this is usually a good way to start an argument, because each of us has our own likes and dislikes and that will color how we view talented people (and there's no doubt there have been many talented rock guitarists).

They picked Jimi Hendrix as the best of all time, and I have to agree with that. There's a saying that I heard a few years ago (can't remember who said it) -- that Les Paul invented the electric guitar, but Jimi Hendrix showed the world how to play it. Jimi was a shy person who didn't give many interviews, but let his guitar do most of his talking for him. And watching him play, it seemed like his guitar was more of a body part rather than a musical instrument. He had complete mastery of it. He died far too young, but fortunately he left us an incredibly impressive body of work -- and I never tire of listening to it.

That's an impressive list of players, and it's hard to argue with those choices -- but I will. Here's the top ten list I would have composed:

There may be some that think such blues guitarists as B.B. King, Robert Johnson, and Buddy Guy don't belong on a list of great rock guitarists. I disagree. A huge part of rock music sprang directly from the blues, and these guitarists had a huge effect on rock musicians who came later. Their greatness cannot be denied, nor their contribution to rock music.

What do you think? How would your list compare to that of Rolling Stone (or mine)? Feel free to leave your own top ten in the comment section (but please don't do it anonymously or it won't be posted). And if you're interested in Rolling Stone's top 100, you can find that here.