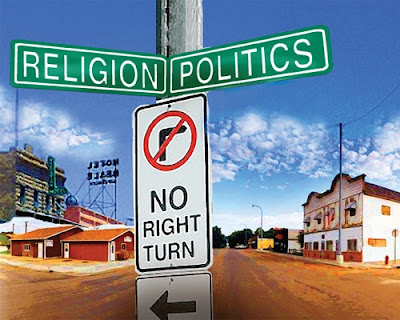 For many years now the Republican Party has depended on the evangelical vote to stay in power. They count on working and middle class evangelicals voting their religious beliefs instead of in their own best economic interests. That's why the Republicans push such issues as gay marriage, prayer in schools, creationism, and abortion. As long as the GOP can get these people focusing on these issues instead of the party's favoritism for the rich, they can keep getting re-elected (especially in the Bible Belt).

But those days may be coming to an end. It seems that far too many young people (between the ages of 18 and 29) are abandoning their evangelical roots. They disagree with their church's teachings on many issues, and don't see them as relevant to their own lives anymore. Here's how Pulitzer Prize-winning journalist Laura Sessions Stepp puts it in an article for CNN (and I urge you to read the whole thing):

Republican conservatives should be worried. Evangelical churches that frequently support conservative candidates are finally admitting something the rest of us have known for some time: Their young adult members are abandoning church in significant numbers and taking their voting power with them.


David Kinnaman, the 38-year-old president of the Barna Group, an evangelical research firm, is the latest to sound the alarm. In his new book, "You Lost Me: Why Young Christians Are Leaving Church and Rethinking Faith," he says that 18- to 29-year-olds have fallen down a "black hole" of church attendance. There is a 43% drop in Christian church attendance between the teen and early adult years, he says.


I'm not surprised. These young dropouts value the sense of community their churches provide but are tired of being told how they should live their lives. They don't appreciate being condemned for living with a partner, straight or gay, outside of marriage or opting for abortion to terminate an unplanned pregnancy. . .


Consider the following facts about millennials in general:


• Seven in 10 millennials say sex between an unmarried man and woman is morally acceptable (PDF). (According to Kinnaman, young Christians are as sexually active as non-Christians.)


• Most women in their early 20s who give birth are unmarried.


• More than six in 10 millennials (including 49% of Republican millennials) support same-sex marriages.


• Six in 10 millennials say abortion should be legal (PDF), a higher proportion than found in the general population. A higher percentage say abortion services should be available in local communities.


Millennials also part ways with conservative orthodoxy on wealth distribution and caring for the environment. According to a report in The Christian Science Monitor, three out of four say that wealthy corporations and financiers have too much power and that taxes should be raised on the very wealthy, and two out of three say financial institutions should be regulated more closely. In addition, most say that creationists' view on evolution is outdated.


Of course, every generation rethinks its beliefs and values during young adulthood. Even the most liberal tend to moderate their views once they marry, have children and start paying a mortgage. Some of them return to church, if only for the structured support of a congregation and the moral instruction their sons and daughters can receive.


But here's the thing: This particular generation is marrying later than prior generations, if they marry at all. They're having children -- and assuming a mortgage -- later. The longer they stay away from church, the less likely they are to come back.


"What used to be two or three years of dropping out is a decade or more," author Kinnaman said. . .


In a very tight race, votes cast by this generation -- which has grown in number by 4 million since the last election -- might make the difference. Their votes will be significant for sure by the end of this decade because by then, millennials will make up a third of the U.S. adult population.
Posted by Ted McLaughlin at 12:02 AM