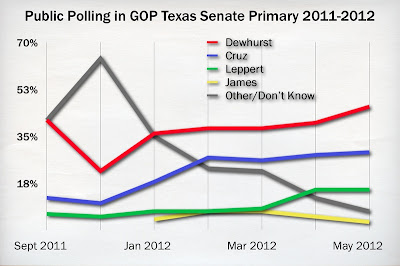 Going into last Tuesday's Republican primary in Texas there were three major candidates in the race for the senate nomination (and several others, including Craig James, who had no hope at all of being competitive). The major candidates included two right-wing candidates (David Dewhurst and Tom Leppert) and one completely crazy, ultra-right-wing, teabagger (Ted Cruz). Dewhurst, the current Lt. Governor, has been the favorite in the race since he officially declared his candidacy last year.

The only real question for a couple of months now was whether Dewhurst would win the primary outright, or whether he would be forced into a run-off with one of his opponents (probably Cruz). Their was some initial excitement about Cruz's candidacy, but since February his candidacy has had trouble building on that early support. So, in an effort to inject some excitement in his campaign, Cruz asked for and received the endorsement of Alaska's Sarah Palin. Palin gave that endorsement in early May, and even recorded a robo-call for Cruz to use (although it seems a bunch of those calls went to Kansas instead of Texas).

So, did Palin's endorsement help the Cruz campaign? It certainly wasn't good enough to put him over the top last Tuesday night. Dewhurst cruised to an easy first place finish with 44.6% of the Republican vote. Cruz got 34.2% of the vote, and Leppert got 13.3%. None of the other candidates could even get 2% of the vote, except James who got about 3.6%.

That means there will now be a run-off between Dewhurst and Cruz. Palin supporters, and some in the Cruz campaign, may credit Palin with injecting excitement into the campaign, but there is little to support that idea. The reason this campaign went to a run-off is because Leppert was in the race and siphoned off over 13% of the vote (most of it probably from Dewhurst).

Look at the chart above (compiled from polling done by the Texas Tribune). Note that since the Palin endorsement in early May there has been very little upward movement for Cruz. But Dewhurst showed significant upward movement. At best, the Palin endorsement did Cruz no good at all, and at the worst, it may have actually helped his opponent. The 15 minutes of fame for Palin is truly over.
Posted by Ted McLaughlin at 12:04 AM