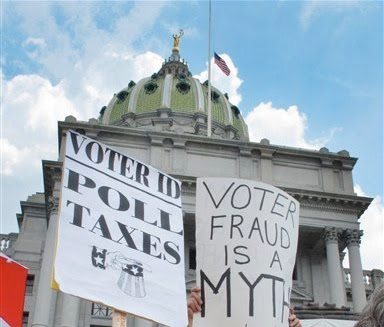 If you follow politics at all, then you have to know about the Republican effort to suppress the vote of groups they think might vote against them in the coming election. In Florida they are just striking voters from the voter registration rolls, and in many other states they have passed Voter ID laws to accomplish this.

But the GOP can't admit they are just trying to suppress Democratic votes, so they have used voter fraud as their excuse -- claiming voter fraud is rampant in this country. Of course it isn't. There are more people hit by lightning each year that people who vote fraudulently. And when challenged on their claim, the Republicans have struggled to find any instances of voter fraud (let alone rampant voter fraud). The Pennsylvania Republican Party admitted to a federal court that they have no evidence of fraud.

Well, it looks like the Republicans were at least a little bit right. Some voter fraud has finally been found. It seems that an Arizona man has been mailing in ballots for his "companion" -- who died five years ago. But the Republicans may not want to celebrate finding this bit of voter fraud. The guilty party is a white Republican -- and even worse he was running for office on the Republican ticket (for Supervisor of Pinal County). He has now withdrawn from the race.

How embarrassing for the GOP!
Posted by Ted McLaughlin at 12:04 AM