How Many Children Must Die ? 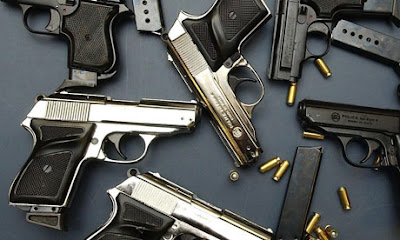 There is no doubt that the United States is a gun culture. There are nearly as many guns as there are people floating around in our society (nearly 300 million guns and about 315 million people). And we seem to be willing to pay a high price for allowing all those guns -- willing to accept thousands of gun deaths each and every year (much more than in any other developed nation.

In an effort to divert attention from the amount and easy accessibility of guns in this country, the NRA has recently announced that guns aren't the problem at all -- that is problem is movies, TV, and video games. Of course, most (if not all) of the other developed nations view the same movies and TV shows as we do, and they play the same video games. But strangely, they don't have anywhere near the same rate of murders, suicides and accidental killings -- and the reason for that is because guns are not as easily accessible in those countries.

Recently, we have witnessed the aftermath of a school shooting in Connecticut where a lot of 6 and 7 year olds were mowed down with an assault weapon. This happened in a small town to young white children, and many are expressing outrage. But the truth is that this is not a lot different from what goes on in this country every single year. Consider the following statistics on murders (by guns) of children under 12 years of age in recent years:

That's a remarkably constant (and horrific) set of numbers. And remember, those are just the murders. If you also count the gun deaths of children by suicide and accident, the number grows much much higher. And if you just raise the age from 12 and under to 17 and under, that 119 figure for 2011 grows to a staggering 565 murders of children that year. We just ignore those murders, both because they have in smaller numbers with each incident and because many of those children were non-white. But those reasons don't make these murders any less senseless or tragic than the Connecticut shootings.

Of course, this brings up some pertinent questions. Have Americans just decided that more than a hundred gun murders of children every year (not to mention hundreds of suicides and accidental gun deaths of children) is an acceptable price to pay for keeping guns easily accessible to nearly everyone? Have we decided that gun ownership is more important than the lives of several hundred children each year (not to mention the thousands that are injured by guns each year)? How many of our children must die before we consider it an unacceptable number -- and do something about it.

Personally I think the number is already far too high, and at the very least we must tighten the restrictions on guns. What do you think?
Posted by Ted McLaughlin at 12:02 AM