Nothing Will Be Done 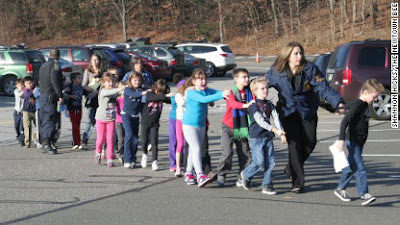 I'm sure you have by now heard of the shooting in the Connecticut elementary school -- where six adults and 20 children (most of them in kindergarten or first grade) were killed in a senseless rampage by a lone gunman. To call this a tragedy is a gross understatement. I was tempted to say that there is never an excuse for killing children (and that would be true), but that statement would infer that there might be an excuse for killing innocent adults (and that would not be true at all). There is never any excuse for the killing of innocent citizens of any age.

Sadly, this is an all too common occurrence in the United States, and no state or community is immune to this kind of tragedy. Here, from Think Progress, are the mass shootings that have occurred just this year:


December 11, 2012. On Tuesday, 22-year-old Jacob Tyler Roberts killed 2 people and himself with a stolen rifle in Clackamas Town Center, Oregon. His motive is unknown.
September 27, 2012. Five were shot to death by 36-year-old Andrew Engeldinger at Accent Signage Systems in Minneapolis, MN. Three others were wounded. Engeldinger went on a rampage after losing his job, ultimately killing himself.
August 5, 2012. Six Sikh temple members were killed when 40-year-old US Army veteran Wade Michael Page opened fire in a gurdara in Oak Creek, Wisconsin. Four others were injured, and Page killed himself.
July 20, 2012. During the midnight premiere of The Dark Knight Rises in Aurora, CO, 24-year-old James Holmes killed 12 people and wounded 58. Holmes was arrested outside the theater.
May 29, 2012. Ian Stawicki opened fire on Cafe Racer Espresso in Seattle, WA, killing 5 and himself after a citywide manhunt.
April 6, 2012. Jake England, 19, and Alvin Watts, 32, shot 5 black men in Tulsa, Oklahoma, in racially motivated shooting spree. Three died.
April 2, 2012. A former student, 43-year-old One L. Goh killed 7 people at Oikos University, a Korean Christian college in Oakland, CA. The shooting was the sixth-deadliest school massacre in the US and the deadliest attack on a school since the 2007 Virginia Tech massacre.
And remember, those were all done this year, and 2012 is not all that unusual.  Several of these kinds of shootings happen each year. Some of them have many victims and others only have a few victims, but all are tragedies. And this is not a new thing that has just started happening in this country. I remember when a gunman entered a cafeteria in Killeen (Texas) in 1991, killing 23 people and wounding another 20. That was more than twenty years ago.
As I watched the TV accounts of the Connecticut shooting and perused the comments of social media users, I heard the same thing being said -- that it is time to have a national discussion about our gun laws, and how we could more effectively keep guns out of the hands of people who shouldn't have them. I agree with that. But haven't we heard those same sentiments expressed after each of these tragedies in the past few years? And yet, that discussion is never held, and our gun laws are being loosened -- not made more restrictive. And I expect we'll see the same thing this time. After a few weeks, the outrage will die down and both state legislatures and our national Congress will get back to the job of making guns more easily accessible to everyone.
And that will happen because that is what the National Rifle Association (NRA) wants to happen. The NRA spends a ton of money each year promoting the notion that tragedies like this either cannot be prevented or can only be prevented by even more people owning and carrying guns in our society. And that NRA propaganda has been very effective, because we can expect many people to parrot one or both of those arguments in the coming weeks -- including legislators and other elected officials. Too many elected officials are running scared these days -- afraid that the powerful NRA will spend money to defeat them if they even try to discuss the issue of more restrictive gun laws.
There have been a couple of rather pathetic attempts at restricting gun ownership in the recent past. In 1994, during the Clinton administration, a ban on the sale of assault weapons was passed. This addressed only the future sale of these weapons, and did nothing about those weapons that already were owned by American citizens. And even that law expired in 2004, during the Bush administration, and no effort to extend it has been able to even reach the floor of either branch of Congress for a vote. So that effort has to be called an epic failure.
Then there is the Brady Handgun Violence Prevention Act, also passed in 1994. This law made it a requirement for licensed gun dealers to not sell a firearm to anyone without first clearing them through a federal background check (which would deny a gun sale to a felon, a fugitive from justice, a person with a dangerous mental illness, or anyone convicted of domestic abuse). This was a good idea, but the law had enough holes in it to make it virtually useless.
First, many states have dragged their feet on reporting persons with dangerous mental illnesses. Second, even if a person could not pass a background check, they could still buy a firearm -- just not from a licensed dealer. They could buy the weapon from a family member, friend, or acquaintance, they could buy the weapon from a gun show, or they could simply check the classified section of nearly any newspaper for people wanting to sell weapons. None of those sources are required to do a background check.
Will there be a national discussion after this most recent tragedy, and will it result in needed and effective restrictions of gun ownership? I hope it can, but I must admit that I doubt either will happen. The NRA is too powerful, too many people have bought into the propaganda that any restriction on guns (even a sensible one) would violate their "rights", and too many politicians put their jobs before doing the right thing to save innocent lives. I know that's a sad assessment of where we are as a nation, and I wish it wasn't true. But I believe it is the truth.
Posted by Ted McLaughlin at 12:06 AM