A Pig With Lipstick Is Still A Pig 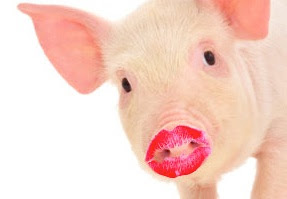 (The image above is from the website HR Examiner.)

The Republicans learned from the last election that they have some problems. Their effective gerrymandering in 2010 saved them from losing the House of Representatives (even though more than a million people voted for Democratic representatives than Republican representatives). But when it comes to statewide and nationwide voting, their unpopularity with the general public is clearly shown -- and it is unlikely they will win the Senate or the White House unless they make some changes.

And while they know that change is necessary, they seem to be unwilling to make any real change. This was demonstrated last week by a couple of the party's politicians -- Newt Gingrich and Bobby Jindal. Gingrich's told Republicans they must become the "happy" party. Instead of constantly whining and complaining, they need to reach out and embrace popular culture, showing they are nice, happy people. Jindal's advice was to stop saying "stupid things", like the remarks made by Akins and Mourdock about rape in the last campaign.

Did women vote against Republicans in the last election because Akins and Moredock said something stupid. Of course not. They voted against Republicans because of the anti-women policies of that party. The statements by those two just helped to highlight those policies.

Did minorities vote against the Republicans because they were complaining and accusatory all the time. Of course not. They voted against them in large numbers because of their racist and anti-immigrant policies.

Did young people vote Democratic in the last election because they didn't think the Republicans were happy people? Of course not. They voted for Democrats because they considered their policies to be fairer and more inclusive of all Americans.

If the Republicans really think they can turn their fortunes around by just being happier and saying less dumb things, then they are cruising for another thrashing in 2016 (2014 will depend on who turns out, as mid-term elections often have a small turnout). If the Republicans want to once again make themselves a mainstream party, one that has a chance of winning nationally, they must moderate their policies. It is the policies that determine whether a party is mainstream or extremist, not the appearance.

Changing the surface appearance is like putting lipstick on a pig -- and a pig with lipstick is still a pig. And with their extremist views right now, the Republican Party is a very ugly pig.
Posted by Ted McLaughlin at 12:06 AM