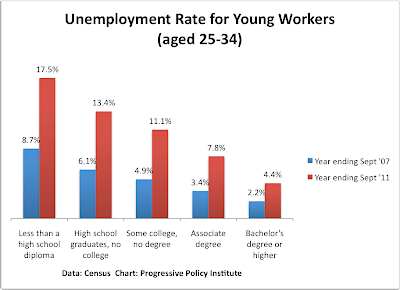 The chart above, from the Progressive Policy Institute, shows the stark truth about unemployment in the United States. The blue bars illustrate that the more education a person has, the better chance they have of finding gainful employment. That shouldn't really surprise any of us. The red bars show that the possibility of being unable to find employment doubles in a recession economy (like the one most Americans are still experiencing). The possibility of a person without a high school education being unemployed in our economy has doubled since 2007.

I present this chart to show the importance of getting as much education as possible these days. But while we need to be doing something to keep kids in school so they can graduate (in some states as many as nearly 1/3 of students do not graduate), some right-wing legislators are doing just the opposite. They are introducing bills that would keep some students from graduating high school.

That is the case with a bill introduced by State Rep. Bob Thorpe in the Arizona legislature. His bill would require all students in that state to swear an oath before they could graduate (regardless of how well they did in school or how high their grade average was). This is the oath he would require:

You may not think making students swear such an oath is a bad thing, but I certainly do. The oath could not be taken by any self-respecting atheist student (or even many agnostics and skeptics), and it would also deny graduation to some religious students -- such as those in religions where swearing an oath of any kind is forbidden (like Seventh-Day Adventists, whose right not to swear an oath has been affirmed by the Supreme Court).

This is a stupid bill. I do know what it is supposed to accomplish, but I do know it could keep many deserving students from graduating high school. I would like to think that even the Arizona legislature is not crazy enough to pass this ridiculous bill, or the Supreme Court would strike it down if it was passed -- but both organizations have made some decisions in the recent past that were very questionable (if not downright stupid).

In fact, I do not like the idea of making students (or citizens) swear a loyalty oath anyway. That is the kind of thing done in fascist states, not free democracies. In a free democracy, citizens have the right (and duty) to oppose what their government is doing when it goes "off the track". That is what freedom means.
Posted by Ted McLaughlin at 12:02 AM