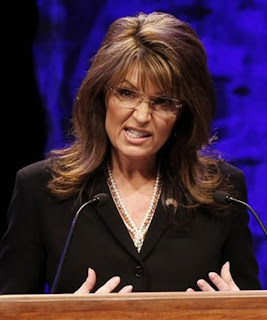 For the last three years (2010 through 2012), half-term governor and failed vice-presidential candidate Sarah Palin has been a paid pundit for Fox News. The bosses at Fox News evidently thought Palin could bring them new viewers and boost their ratings. They were wrong.

Fox created a special on Palin, and it bombed in the ratings. Even the right-wingers who love Fox News didn't want to watch it. And she didn't do much better when appearing as a guest on Fox News shows. The two shows she did the most appearances on (Sean Hannity and Greta Van Sustern's shows) are the shows that lost the biggest percentage of viewers since the last election.

Obviously, Americans (even right-wingers) just weren't interested in the word-salads offered up by the woman from Wasilla. So it doesn't come as any surprise that Fox News has refused to renew Palin's contract. Palin has said she made the decision to leave to investigate other opportunities. That's hard to believe. The Fox News gig was the easiest money Palin ever made, and I think she would have stayed for many years if she could have.

But Fox News finally realized that Palin's 15 minutes of fame was over -- something most Americans knew a couple of years ago. And Fox couldn't drop her fast enough after the contract was up. But their failed experiment with Palin turned out to be a fairly costly mistake. They had paid Palin one million dollars a year for the three years -- for a total of three years and three million dollars.

The folks over at Smart Politics have done some math for us, and determined just how expensive Fox' gambit with Palin really was. It turns out that for the three million dollars, Palin gave them a total of 189,221 words -- 72,986 words on Hannity's program, 67,987 words on Van Sustern's program, and 48,248 words on other Fox News shows.

When you divide the number of words uttered by Palin in her three year stint into her three million salary, you get the amazing fact that Fox paid her $15.85 per word. Those are some pretty expensive words, especially considering they were purchased from a brain-dead has-been who seldom made sense with those words.

I would say that I hoped Fox News had learned something from this folly, but they just signed a new contract with Karl Rove -- after his embarrassing election night meltdown. That makes me think they haven't learned anything at all.
Posted by Ted McLaughlin at 12:04 AM