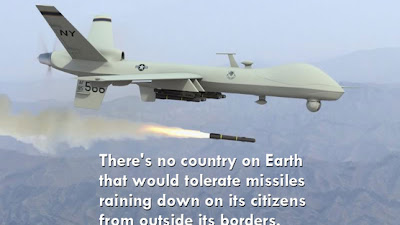 The idea of using drones (unmanned aircraft piloted from a distance) to attack an enemy is not a bad idea in theory. It can rain down destruction on an enemy without putting the lives of those making the attack in danger. That's something the military has always wanted -- the ability to attack the enemy without endangering their own soldiers. And I don't really have any problem with drones being used in a battlefield situation.

But that is not how they are being used in a lot of cases. Too many times they are used to attack places where it is obvious that innocent civilians (many times children) are likely to be. They are also used to attack across borders (when we are not even at war with that country and would never send a manned aircraft to do the attack). Knowingly attacking civilians (even if a terrorist is among them), and attacking people in another nation without that country's knowledge and permission, are both violations of international law and common decency -- and unworthy of any nation claiming to support human rights.

Our government does both. While they claim that the killing of innocent civilians ("collateral" damage) is accidental, the body count is getting high enough to call that excuse seriously into question. The Bureau of Investigative Journalism says that from 473 to 889 innocent civilians have been killed in drone strikes. That's an awful lot of accidental killings, and they could all have been prevented if the U.S. would just stop using drones to attack civilian areas.

Retired General Stanley McChrystal has warned recently about the overuse of drones. He has a point. Overuse and misuse of drones can cause a lot of justifiable ill-will toward this nation -- and may actually (because of the killing of innocent civilians) create more enemies than it disposes of.

There is no doubt that drones are here too stay. Their value in combat is undeniable. But we need to adopt and follow some rules regarding their use -- and those rules should follow international law. Using a drone to attack any area where civilians are likely to be is nothing short of murder, and it must be stopped. NOW! And it doesn't matter whether it is a Republican or a Democratic administration that orders the attack -- it is still wrong.
Posted by Ted McLaughlin at 12:04 AM