Rubio Shoots Himself In The Foot 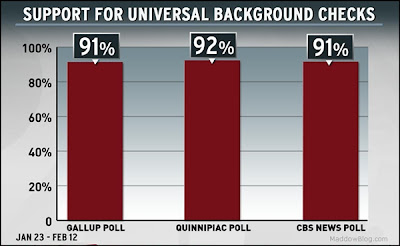 There is no doubt anymore that the vast majority of Americans (around 9 out of 10) want to see a background check done on all people trying to buy a gun -- even those buying from a private person. This has been shown by poll after poll. Why then would a presidential hopeful come out against such a popular idea?

That is exactly what has happened. Sen. Marco Rubio (R-Florida) has joined Mike Lee, Ted Cruz, and Rand Paul in saying he will filibuster any gun bill that Majority Leader Reid (D-Nevada) tries to bring to the floor. In other words, he won't even allow a vote on the bill. And the only bill passed out of the Judiciary Committee is one that would close the loopholes on background checks and raise the penalties for gun trafficking (also supported by most of the public).

This might help Rubio with base Republican right-wingers, but it will hurt him in a general election (if he was somehow able to get the GOP nomination). He may think it will all be forgotten by 2016, but he is wrong. As Romney learned, the days of etch-a-sketch politics is over. And if the voters need to be reminded of this position he has taken (to not even allow a vote), then  the Democrats will be more than happy to remind them.

I think Rubio just damaged any small chance he ever had of being president. It probably won't matter though, because a new Public Policy Polling survey shows that Hillary Clinton has extended her lead over him in his home state of Florida (and over Jeb Bush and Paul Ryan). And if you can't win your home state, you don't have much of a chance of carrying the nation. Here are those PPP Florida numbers: