A couple of Texas' more famous (or infamous) personalities recently spoke out about the LGBT community and same-sex marriage. They are Willie Nelson and Rick Perry. Needless to say, their views were on opposite ends of the spectrum. Since I was born and raised in Texas, and have lived in the Lone Star State almost all if my life, I thought I'd throw my two cents worth in.

It will not surprise regular readers of this blog that my views are identical to those of Willie. He spoke out in Texas Monthly magazine recently, and said the following:

I've known straight and gay people all my life. I can't tell the difference. People are people where I came from.
I never thought of  marriage as something only for men and women. But I'd never marry a guy I didn't like.
It's about human rights. As humanity, we've come through so many problems from the beginning to here.  I guess it finally had to come around to this. This is just another situation, another problem. We'll work it out and move on.
We'll look back and say it was crazy that we ever even argued about this.

I agree with him, but I found another statement he made very interesting. Interesting because it might surprise a lot of people -- since Texas currently has a reputation as a bigoted and homophobic state. When the TM reporter asked Willie if he came up with the idea of equality for gays/lesbians rather early in his life (while growing up in Abbott, Texas), he replied:

People are people where I came from. . . It never came up. Gay or straight? Married, not married?  It was never a question. And now there's fussin', fightin', and arguin' over it? Let's get off that and talk about guns.

If that tends to surprise some of you, let me say that it is true. Growing up in Texas, I had much the same experience as Willie. It was just not something that most people even talked about (and certainly didn't make a big deal about it. I think there are some reasons for that.

* Back then most gays/lesbians were still in the closet, and people found it easier to ignore their existence.
* Much of Texas looks to more of an independent Western heritage -- which holds that if a person was honest, worked hard, and helped his/her neighbors, then most people didn't think personal details about about a person's life were any of their business.
* It was not discussed in the churches at that time.

It was not until much later that the LGBT community decided that they were Americans, and worthy of the same rights given to all other Americans. That caused a vehement backlash in the fundamentalist churches (which compose a major part of the state's religious make-up). All of a sudden preachers were telling people that they could not be good christians unless they were bigoted and homophobic -- and far too many Texans accepted that argument (since Texas is a prominent state in the fundamentalist Bible Belt). The churches forced the issue, and since many people wanted to be considered good "christians", they went along with bigotry (that was covered with a thin veneer of religion).

And one of the people that went along with this Bible-slanted bigotry was Rick Perry (who wears his religion on his sleeves, in the hope that will get him votes). Perry recently played to his Bible-thumping base by telling the Dallas Morning News:

"In Texas, it is fairly clear about where this state stands on that issue. As recently as a constitutional amendment that passed—I believe, with 76 percent of the vote. The people of the state of Texas, myself included, believe marriage is between one man and one woman."

I think he's wrong. That constitutional amendment was voted on in 2005 -- eight years ago. And as all polls have shown, this country has changed a lot in the last decade regarding their views of same-sex marriage. And while Texas teabaggers may not want to admit it, Texas has not been immune to those changes. Views have changed in the Lone Star State as well.

There is not yet a majority wishing to legalize same-sex marriage in Texas (slightly less than 40% according to James Henson and Joshua Blank of the Texas Politics Project), but there is another significant group of Texans who think the LGBT community deserves the same rights as married heterosexuals through civil unions. The upshot of the trend in Texas means that now 6 out of 10 Texans now believe gays/lesbians should have the same rights that heterosexuals get through marriage. Less than 30% of Texans don't think those rights should be extended to the LGBT community through either marriage or civil unions (and the rest say they don't know).

Perry is clinging to a past that no longer exists in Texas. It will take Texas a bit longer to legalize same-sex marriage than a lot of other states, but it is changing and that day will come. 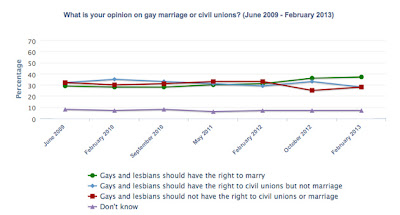