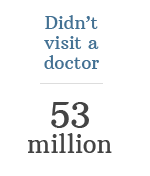 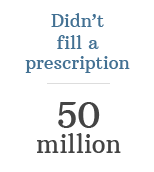 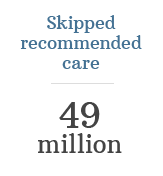 (The figures above are from CNN, and based on the Commonwealth Fund's Biennial Health Insurance Survey.)

Those are some pretty shocking numbers. They are the number of Americans who did not seek or get the health care they needed because they could not afford to do so. The fact is that visiting a doctor, filling needed prescriptions, and getting recommended care would save many lives -- but far too many Americans simply cannot afford to do it.

At least 80 million million adults in this country (about 43% of working-age people) still don't receive the health care they need (by not being able to afford one or more of the things listed above). The Affordable Health Care Act (Obamacare) was supposed to fix this problem, and allow all Americans to get the health care they need -- especially preventative care (which can catch serious illnesses in their early stage, when they can still be cured).

Obamacare has been a failure in two different ways. First, poor people and low-wage workers were supposed to be covered by a expansion of Medicaid, and that is happening in a lot of states. But thanks to a Supreme Court decision that allows states to opt out of Medicaid expansion, several Republican-controlled states (like Texas, where over 28% of the population has no health insurance) are refusing to expand their Medicaid programs -- meaning that millions of poor and low-wage people will continue to be without any health insurance at all.

Second, Obamacare depended on getting most of the population covered by private health insurance. That was a mistake. About 28% of the above numbers are workers with what is called "good insurance". But their deductibles are so high that they still cannot afford the important preventative care (or medications) that they need. Their private insurance plans provide little more than an illusion of giving them medical care.

Obamacare was a valiant attempt to fix the health care system, but it is a failure -- because it still leaves too many people without the means to get the care that they need. It is only a band-aid on a serious wound that requires surgery. And we still have a broken system that needs fixing.

It is time to admit that there are some things that can be done better by government than the for-profit private sector. Health care is one of those things. All other developed nations recognize that their citizens have a right to decent health care, and they make sure their citizens get that care -- many of them through government provided health insurance.

This country needs to cover all of its citizens with government-run single-payer health insurance (sort of like Medicare expanded to cover everyone). It is this country's great shame that it still considers health care to be a commodity, available only to those who can afford to pay for it. Decent health care should be recognized as a basic human right, and treated as such.
Posted by Ted McLaughlin at 12:06 AM