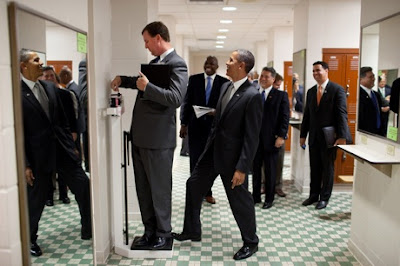 Whatever they might think of his politics (or his accomplishments and failures), I think most Americans know that President Obama is a decent man with a very good sense of humor. This is shown in the photo above, where during a visit to the University of Texas he slips his foot on the scales while a cohort was trying to weigh himself. The president is also not afraid to use that humor to poke fun at himself, and that has made him very popular at the annual White House Correspondent's Dinner. Here are some of Obama's jokes from this year's Correspondent's Dinner:

How do you like my new entrance music?  (Applause.)  Rush Limbaugh warned you about this — second term, baby.  (Laughter and applause.)  We’re changing things around here a little bit.  (Laughter.)

Actually, my advisors were a little worried about the new rap entrance music.  (Laughter.)  They are a little more traditional.  They suggested that I should start with some jokes at my own expense, just take myself down a peg.  I was like, guys, after four and a half years, how many pegs are there left?  (Laughter.)

Now, look, I get it.  These days, I look in the mirror and I have to admit, I’m not the strapping young Muslim socialist that I used to be.  (Laughter.)  Time passes.  You get a little gray.  (Laughter.)

And yet, even after all this time, I still make rookie mistakes.  Like, I’m out in California, we’re at a fundraiser, we’re having a nice time.  I happen to mention that Kamala Harris is the best-looking attorney general in the country.  (Laughter.)  As you might imagine, I got trouble when I got back home.  (Laughter.)  Who knew Eric Holder was so sensitive?  (Laughter and applause.)

And then there’s the Easter Egg Roll, which is supposed to be just a nice, fun event with the kids.  I go out on the basketball court, took 22 shots — made two of them.  (Laughter.)  That’s right:  two hits, 20 misses.  The executives at NBC asked, “What’s your secret?”  (Laughter and applause.)

I want to give a shout-out to our headliner, Conan O’Brien.  (Applause.)  I was just talking to Ed, and I understand that when the Correspondents’ Association was considering Conan for this gig, they were faced with that age-old dilemma:  Do you offer it to him now, or wait for five years and then give it to Jimmy Fallon?  (Laughter.)  That was a little harsh.  (Laughter.)  I love Conan.

And of course, the White House press corps is here.  I know CNN has taken some knocks lately, but the fact is I admire their commitment to cover all sides of a story, just in case one of them happens to be accurate.  (Laughter and applause.)

The History Channel is not here.  I guess they were embarrassed about the whole Obama-is-a-devil thing.  (Laughter.)  Of course, that never kept Fox News from showing up.  (Laughter.)  They actually thought the comparison was not fair — to Satan.  (Laughter and applause.)

But the problem is, is that the media landscape is changing so rapidly.  You can’t keep up with it.  I mean, I remember when BuzzFeed was just something I did in college around 2:00 a.m.  (Laughter.)  It’s true.  (Laughter.)

I know Republicans are still sorting out what happened in 2012, but one thing they all agree on is they need to do a better job reaching out to minorities.  And look, call me self-centered, but I can think of one minority they could start with.  (Laughter.)  Hello?  Think of me as a trial run, you know?  (Laughter.)  See how it goes.  (Laughter.)

If they won’t come to me, I will come to them.  Recently, I had dinner — it’s been well publicized — I had dinner with a number of the Republican senators.  And I’ll admit it wasn’t easy.  I proposed a toast — it died in committee.  (Laughter.)

I am not giving up.  In fact, I’m taking my charm offensive on the road — a Texas barbeque with Ted Cruz, a Kentucky bluegrass concert with Rand Paul, and a book-burning with Michele Bachmann.  (Laughter and applause.)

My charm offensive has helped me learn some interesting things about what’s going on in Congress — it turns out, absolutely nothing.  (Laughter.)  But the point of my charm offensive is simple:  We need to make progress on some important issues.  Take the sequester.  Republicans fell in love with this thing, and now they can’t stop talking about how much they hate it.  It’s like we’re trapped in a Taylor Swift album.  (Laughter.)

I’m also hard at work on plans for the Obama Library.  And some have suggested that we put it in my birthplace, but I’d rather keep it in the United States.  (Laughter.)  Did anybody not see that joke coming?  (Laughter.)  Show of hands.  Only Gallup?  Maybe Dick Morris?  (Laughter and applause.)
Posted by Ted McLaughlin at 12:04 AM