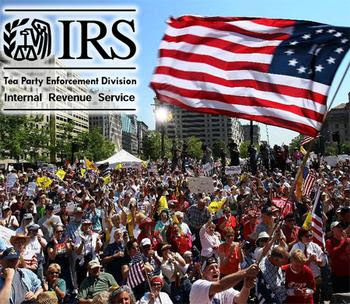 The teabaggers and their right-wing allies have made numerous accusations against the Obama administration and the federal government, and almost all of them have turned out to be false (most of them spurred by a malicious and racist fear of the loss of white privilege in this country). I said "almost all" because it looks like there is one accusation that is true.

There are those in the Internal Revenue Service (IRS) who have been singling out teabagger groups for audits -- not because there is any evidence or suspicion of wrongdoing, but just because they were deemed undesirable politically. The IRS has now apologized and claimed they didn't know it was happening, but there is evidence that IRS officials have had knowledge of the practice since sometime in 2011.

I have no love for the various teabagger groups. I consider them to be dangerous to the maintenance of a free democracy, because they have little regard for truth or ethical behavior. And I believe that honest and decent Americans must fight against these groups. But the place for that fight is at the ballot box and in the court of public opinion. It is never appropriate to use the power of any government agency for political purposes.

The actions of those in the IRS who participated in this targeting of teabagger groups were wrong -- and those who did the targeting, along with those who knew about it and did nothing to stop it, should be immediately terminated (and investigated to see what federal laws they may have broken).

This is not the first time the power of government has been used to punish political enemies. The Nixon administration was toppled for this very thing. It was wrong back then, and it is still wrong. It doesn't matter whether those actions are directed at left-wing groups or right-wing groups -- it is always wrong!

The agencies of the federal government should have the right to investigate groups on either side of the political spectrum, but only if there is probable cause to think a crime may have been committed. They should never be used to support or oppose the politics of any group. That is the job of voters, not the government.
Posted by Ted McLaughlin at 12:06 AM