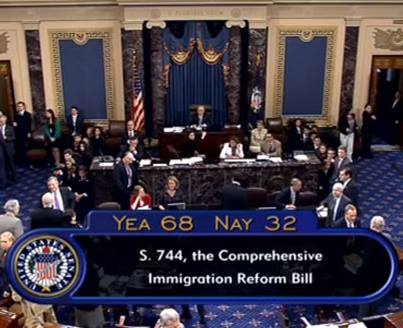 The Senate has passed its immigration reform bill on a 68 to 32 vote, and that bill does have a path to citizenship for undocumented immigrants -- although it is a long and onerous path that makes the bill barely acceptable. But the passage of this bill is not likely to help Republicans in future elections, since more than twice as many of them voted against it than voted for it. While 14 Republicans voted for the bill, 32 Republicans voted against it -- showing that the party is still unwilling to give up its anti-immigrant policies (even if it would help them with the fast growing Hispanic population).

Now the bill moves on to the GOP-controlled House, where it has almost no chance of passing. In fact, Speaker Boehner has not even committed to bringing it to the floor for an up or down vote. Even though the Senate made the bill's path to citizenship a very difficult one, it is still not a hard enough path for House Republicans (who really want no path to citizenship at all). The House's GOP members, who must face re-election every two years, are too afraid of angering their racist teabagger base to vote for reform.

But while I still think Congress will not send an immigration reform bill to the president this year, I do want to offer a small pat on the back to the 14 Republican senators who had the political courage to vote for reform. They are: