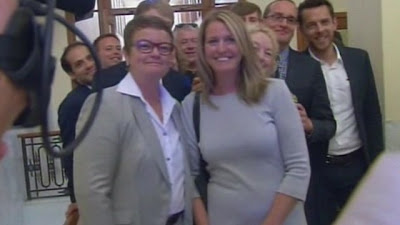 The happy couple pictured above are Kris Perry and Sandy Stier, who were celebrating their marriage in California. Governor Brown had ordered all county clerks to again start issuing marriage certificates as soon as the 9th Court of Appeals dropped its stay in the Prop 8 case, since the Supreme Court upheld that courts decision vacating the law banning those marriages. It had been expected that would take 20 to 25 days to happen. But the 9th Court of Appeals, seeing no reason to delay, surprised everyone and lifted their stay on Friday. And same-sex couples immediately starting taking advantage of the situation.

With the addition of California, there are now 13 states and the District of Columbia that have legalized same-sex marriage (encompassing about 30% of the population of the United States). Only 37 more states to go!
Posted by Ted McLaughlin at 12:04 AM