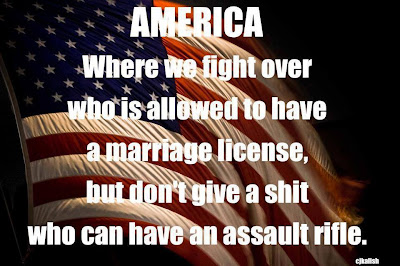 It seems to me that we have our priorities skewed in the United States. Allowing a same-sex couple to marry will not hurt any other person in any way. But millions want to prevent it, because it offends their religious sensibilities (which they would like to force on their fellow citizens). But allowing anyone to have an assault rifle (or any kind of gun) does affect other people -- because some people (the dangerously mentally ill, criminals, political nuts, etc.) will take their gun and kill others.

Unfortunately, our congressional officials (especially the Republicans) think it is more important to protect the ability of people to kill others than to protect the rights of someone in the LBGT community to marry the person they love. That's just not rational thinking.
Posted by Ted McLaughlin at 12:00 AM