Republicans Are The "Death Panel" 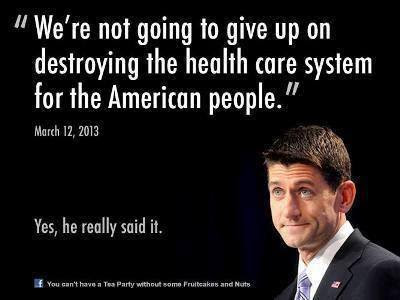 Yes, he said it -- and even worse, he meant it. He and his Republican cohorts in the House have now voted 38 times to repeal the Affordable Care Act (Obamacare). And since the Senate and White House won't even look at those 38 ridiculous bills, they are now devising another strategy. They are going to threaten to shut down the government when the debt ceiling will need to be raised next October -- unless President Obama and the Democrats agree to completely defund Obamacare (which would kill it, since it couldn't be implemented).

And it doesn't stop there. Ryan and his GOP buddies have repeatedly proposed plans to abolish Medicare, leaving seniors at the mercy of the giant insurance companies (who will cherry-pick the healthiest, and leave the rest with policies that are too expensive for them to buy -- even with the little government help the GOP would allow). In short, the Republicans don't care about the elderly either.

When Obamacare was being proposed and debated, the Republicans kept repeating an outrageous lie -- that Obamacare would create "death panels" to decide who should get medical care and who should just be allowed to die. Now we know the truth. There really is a "death panel" -- and it is the uncaring and mean-spirited Republicans in Congress. Because they are happily willing to let American citizens die from a lack of health care insurance -- just because they don't like President Obama.

This is just another reason (among many) to vote against the Republican Party in 2014.
Posted by Ted McLaughlin at 12:06 AM