Secrecy Is A Terrible Idea In A Democracy 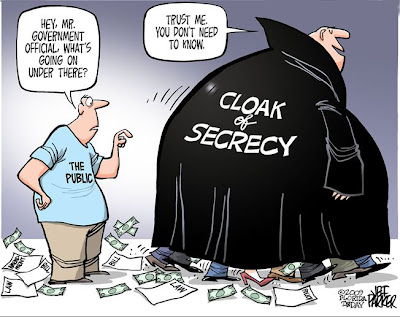 (The cartoon above is by Jeff Parker and was published in Florida Today.)

Sometimes it seem like our elected officials would rather we didn't have an open and democratic form of government. They would rather perform their duties in secret -- because they either don't believe in democracy, or lack the political courage to legislate in an open and free forum. It doesn't matter which of those is true, because it is just a fact that secrecy is the enemy of democracy.

That's one of the primary reasons that free speech and free press were rights included in our Constitution's First Amendment. Our forefathers understood that for a democracy to work, the people must know what their elected officials are doing. This is an understanding that many of our current elected officials don't seem to understand.

And it looks like many of those politically ignorant officials are in the United States Senate. The Senate Finance Committee is currently considering reforms to our current tax code. But they want any ideas put forward by individual senators to be kept secret FOR 50 YEARS. They have decided those ideas could not be revealed to the public until at least December 31, 2064.

This idea of keeping the ideas on tax reform by senators secret is not only outrageous -- it is downright stupid. The American people have a right to know what their senators are doing. They have a right to know not only what the final bill looks like, but also what the individual senators are proposing and want included in that final bill. And any senator too cowardly to publicly state his/her ideas is not worthy of the office he/she holds -- and should resign immediately so the voters can elect someone with political courage (and better ideas).

I know there are those who think this initial secrecy will allow senators the freedom to consider all ideas. I disagree. It is important that democratic government be conducted in an open manner -- and that citizens are able to see what their representatives are proposing. And frankly, any idea a senator is afraid to propose publicly is probably a bad idea anyway.

Fortunately, a few senators are unwilling to play this silly game of secrecy. One of those is Senator Bernie Sanders (I-Vermont). Sanders has turned down the committee's offer to keep his suggestions secret, and has even published his suggestions on his web site. You can go to that site for a more in-depth analysis of his proposals, but here are his basic ideas:

* Stop large corporations from stashing their profits in the Cayman Islands and other offshore tax havens to avoid paying U.S. taxes.

* Tax capital gains and dividends the same as work.

I like his proposals, and they would add $1.5 trillion in revenues over the next 10 years. I would also like to hear what the other senators are proposing, whether on the left or right politically. I think all of us deserve to know that. Don't you?
Posted by Ted McLaughlin at 12:04 AM