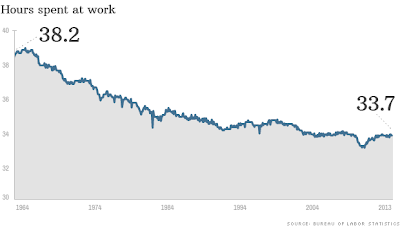 (The chart above is from the website of CNNMoney.)

"Americans are working far less now than they did a generation ago, and have more leisure time than ever."

That's a quote from Steve Hargreaves writing for CNNMoney. Sounds great doesn't it? Well, it's not as good as it sounds, because it also means that more Americans are working for less money. The primary reason for this drop in the average work week is the explosion of new part-time jobs. As businesses start to replace workers who lost millions of jobs in the Great Recession, many of those new jobs are now part-time jobs -- jobs where businesses can pay less and deny benefits (like health care or a pension plan).

We have already seen that the median income in the U.S. is dropping, and many Americans are dropping out of the middle class. And one of the big reasons for both is this replacement of good full-time jobs with either minimum wage or part-time jobs. In fact, most of the jobs created in this "recovery" have been either minimum wage or part-time jobs -- neither of which will support a family.

It really doesn't benefit a family to have more leisure time, if it is accompanied by a drop in income (and a loss of benefits). Leisure activities cost money (like everything else in our society), and too many Americans are still mired in the after-effects of the recession -- having to use that extra "leisure time" to mount a continuing, and many times futile effort, to find full-time work that will give them a livable wage.

The recession is truly over for the rich and the corporations. They are now making more money than ever before. But it is not over for those on Main Street. That's because businesses are using the high unemployment to cut wages, cut hours, and deny benefits -- leaving workers with little choice but to accept falling wages, disappearing benefits, fewer hours, or unemployment. And we are not talking about just a few workers, but about 90% of the population.

How much longer are we going to put up with this? It certainly won't be fixed by cutting taxes for the rich and the corporations, or by taking money out of the economy through "austerity" -- the only "solutions" the Republicans have offered. It will only be turned around by increasing the minimum wage (to at least $10 an hour), strengthening labor unions and making it easier for workers to organize, stopping the outsourcing of good American jobs (by eliminating tax breaks and instituting tax penalties for that outsourcing), and putting more money into the economy to increase demand (by spending more on education, research, social programs, and rebuilding our infrastructure).

Right-wingers will whine that we can't afford to do those things, but they are wrong. The corporations and the rich are paying lower taxes than ever, and they need to pay a little more. And our bloated military budget could be cut substantially, since it is ridiculous that we spend close to half of all the money spent on military matters in the entire world. We could cut that budget in half, and still be spending more than any other nation on earth -- friend or enemy.

Our economic problems could be fixed. But it won't be fixed by those currently in Congress. The Republicans don't want to fix them (since their primary constituency, the rich & corporations, are doing great), and too many Democrats are too timid to rock the boat (being afraid they won't be re-elected if they do).
Posted by Ted McLaughlin at 12:06 AM